The ACT Government is developing The Valley Ponds, Gungahlin. Construction of the three interconnected wetlands began in February 2012 and is nearing completion.

View of pond 2 from the native grassland and the outdoor classroom (part completed).

The main role of the wetland is to improve the quality of stormwater before it enters Ginninderra Creek.  The wetlands also slow down stormwater released from the Gungahlin Town Centre, increase urban biodiversity and provide stormwater for irrigation of the enclosed oval.

Greening Australia were engaged to remove soil samples from key areas to be disturbed by construction. Plant material grown from these samples was re-established on site. 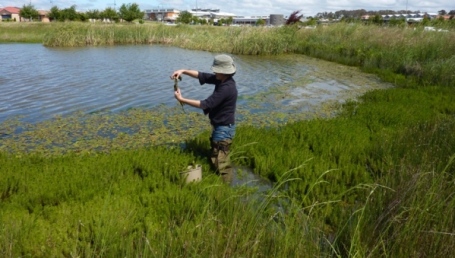 The existing on site pond was an excellent source of wetland plants. Edwina Robinson, Urban Waterways Coordinator collected Myriophyllum and Potamogeton and transplanted them at the Banksia Street, O'Connor wetland. Photo: Richard Bourne 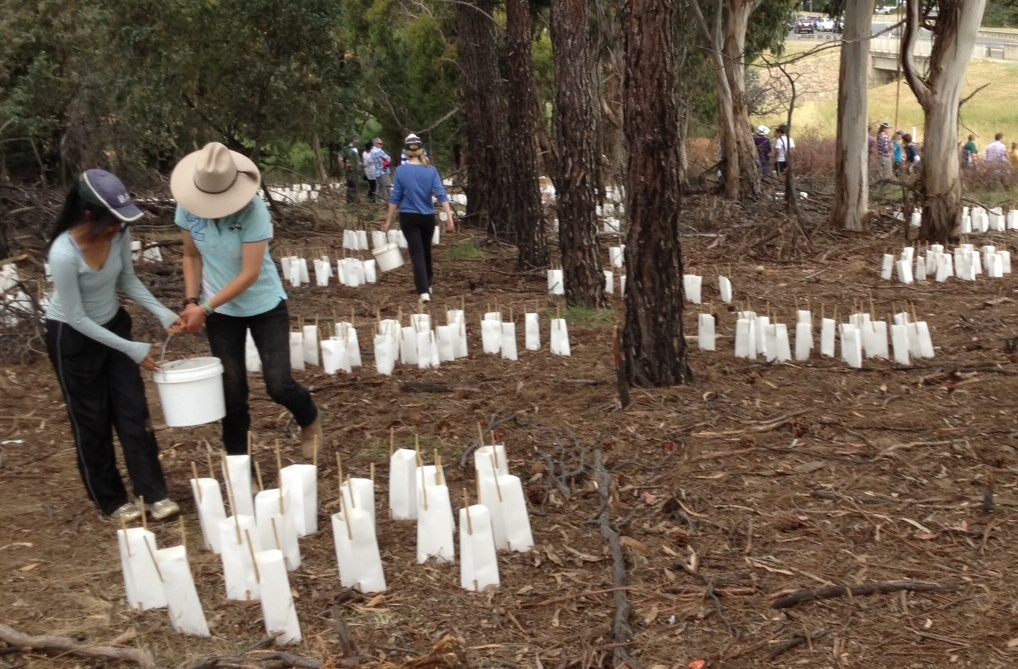 In 2012 the ACT Government, Ginninderra Catchment Group, conservation groups and local community began rehabilitating a patch of Gungahlin land. Located between Gundaroo Drive and the newly constructed wetlands the windbreak which doubles as a wildlife corridor was overrun with Cootamundra Wattle (Acacia baileyana). With the help of volunteers, this weedy wattle was removed from the native grassland and partly removed from the wildlife corridor. Hundreds of bird attracting native shrubs and grasses have been planted.

For the past three years, students from Gungahlin College have taken part in the Frogwatch Census at The Valley Ponds.  Frogs are a great indicator of how healthy a waterway is. ABC reporters compiled this story of the the census: 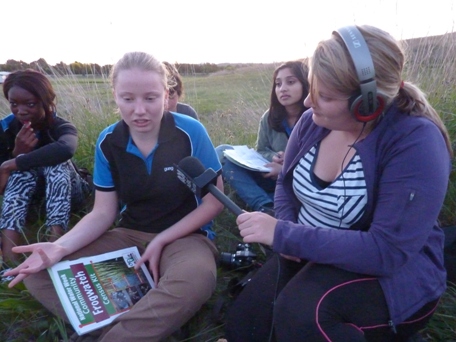 The Green Team, Gungahlin College participated in the Frogwatch survey in October 2010 with the Urban Waterways Coordinator. Photo: Edwina Robinson

In the latest survey, conducted in October 2013 at the Frog Pond, four species were recorded.  These were: Friends and family of Burgmann School and Gungahlin College turned up on Sunday 16 September 2012 to plant native plants at the wetlands. Photo: Edwina Robinson

The local scout group helped transform the frog pond back to a wetland on Sunday 23 September 2012. Photo: Edwina Robinson. Around 14 months later plants were thriving in the area planted by the community.

A range of events were held over 2010-2012 to inform the community about the project, these include: