Construction of the wetland was completed in February 2010.

Banksia St, is an example of an off-line wetland - low flows from the concrete stormwater channel are diverted into the water body.  Once the water has made its way through the wetland it overflows through an outlet  into a underground pipe which discharges back into the channel.  From there the water makes it way down the channel eventually discharging into Lake Burley Griffin. 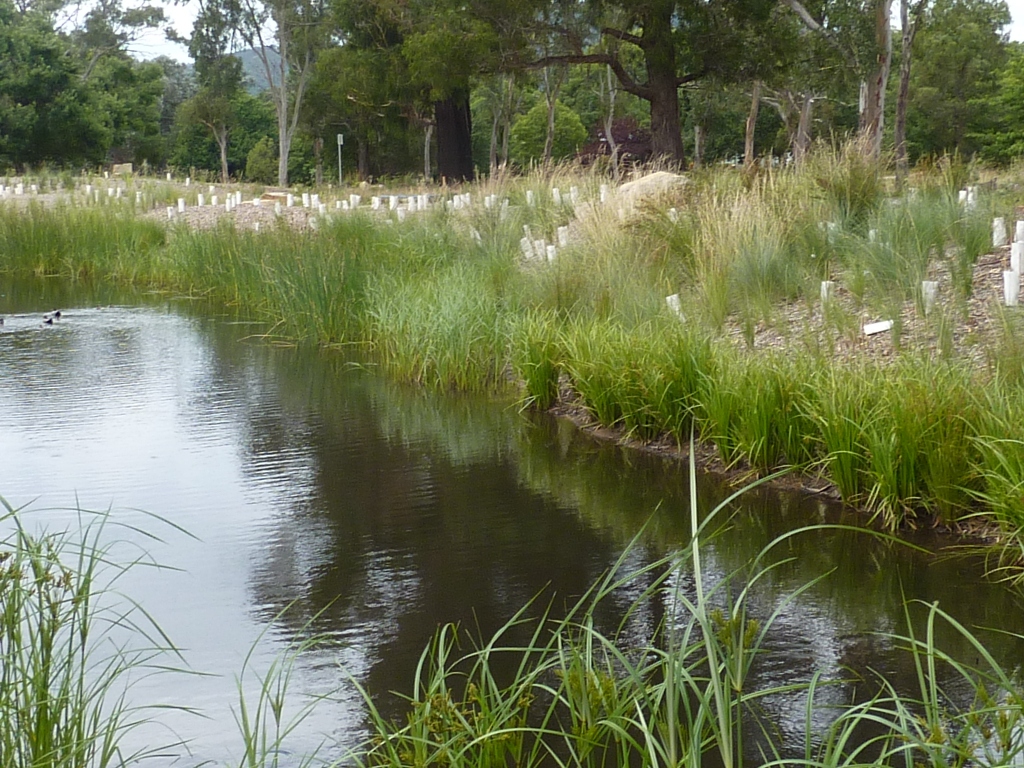 Thriving plants at Banksia St. The landscape surrounding the pond was planted by the Banksia St Wetland Carers with the help of the ACT Government.

The wetland was designed to:

The wetland includes two sections - a pond that is approximately 1.4 metres deep in the centre at  normal operating level and an ephemeral zone that ranges from 0mm to 300mm deep.  Banksia St, is Canberra's first retrofitted urban wetland to incorporate an ephemeral section designed to dry out during summer. Ephemeral wetlands occur throughout Southern Australia and will become more common with a drying climate.  These shallow areas become inundated after rainfall and dry out during summer.  Spiky sedges, native grasses and broad leaf plants grow in ephemeral zones and are adapted to both wet and dry conditions.

Article about the wetland

Since construction finished in 2010, the landscape was planted by members of the volunteer group, the Banksia Street Wetland Carers.  The group is supported by the ACT Government.  Thousands of native grasses, macrophytes (reeds), forbs (non-woody flowering plants), climbers, shrubs and trees were installed.  Most plants have thrived with good soil preparation and two excellent growing seasons.

The Directorate worked with local artists to produce artworks that reflect the wetland's character.  Fired clay tiles made by students were installed in the concrete pathway by Lead.

A four metre red gum sculpture, by Paul Jamieson, was installed in August 2011.  The design was selected by a committee made up of local residents and Urban Waterways representatives.

Detail of tiles installed in the paving at Banksia St.  The tiles of leaves and birds were inspired by Girl Guides design. Photo: Edwina Robinson

Maned wood ducks quickly arrived after the wetland filled.  Other water birds spotted at the wetland include ibis, Little Pied Cormorants and a Darter. The wood ducks were followed in Spring 2010 by common eastern froglets.  The water is teeming with macro-invertebrates (water bugs visible with the naked eye) and swathes of dragonflies.

Unfortunately, the feral fish, Gambusia holbrooki, also known as Mosquito Fish, has made its way into the wetland.  These small fish were introduced from America to control mosquitoes but prey on native fish, tadpoles and macro-invertebrates. In August 2011, ecologists from the Directorate used nets to capture these fish.  One sweep of the net caught two handfuls of them - around 447 individuals! Eastern Long-necked Tortoise sometimes live at the wetland.  They can often be seen basking on the perch in the middle of the pond - but you need to be quiet to see it. 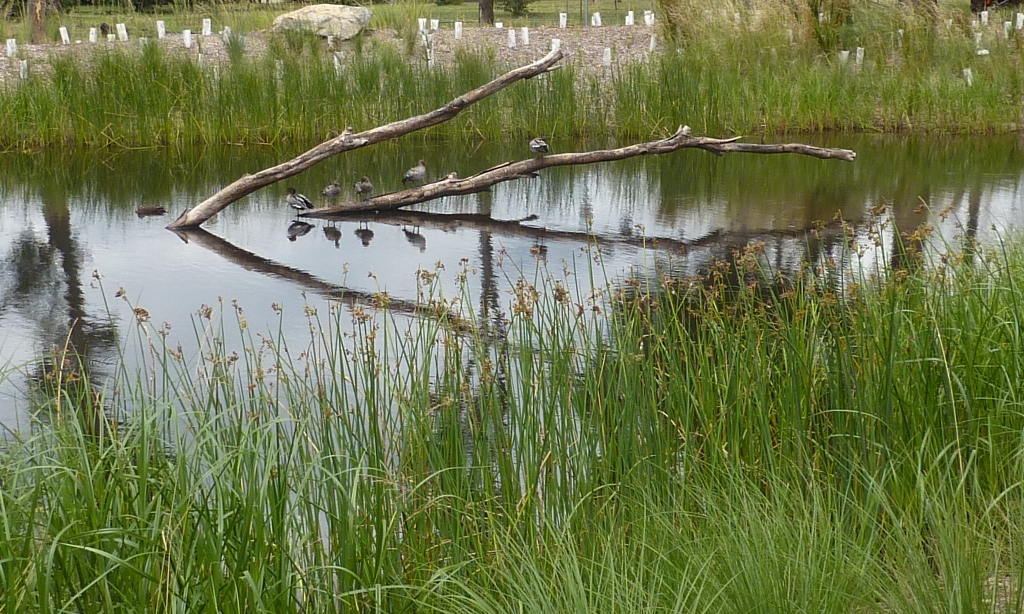 Wood ducks and other waterbirds use the perch as a safe resting place away from dogs, cats, foxes and people. Photo: Edwina Robinson

Sulphur crested cockatoos and wood ducks created havoc with plantings.  In Winter 2010 the cockatoos ripped out newly planted Dianella and Lomandra.  To protect new plants, the community installed cardboard guards around plants.  This worked as an effective deterrent. Become a Facebook friend of the Banksia St Wetland