The Dickson and Lyneham wetlands are the latest in a suite of wetlands to be constructed in the Sullivans Creek Catchment.

During warmer months, the Dickson Wetland Carers meet on average once a month to help weed and collect rubbish at the wetland.  Image: Edwina Robinson. April 2013.

These wetlands provide multiple benefits including:

The construction of the off-line wetland at Hawdon St, Dickson was completed in December 2011. The pond and surrounds have been planted with a wide variety of locally occuring plants.

Excess stormwater will be piped to the Dickson Playing Fields and stored in tanks on site.  This water will replace the use of potable water (drinking quality water) and helps the ACT Government reach its water reduction targets.

Over 200 people attended the Community Planting Day on Saturday 4 June 11 despite the bleak weather. They planted macrophytes (reeds), native grasses and trees and installed tree guards to protect plants from ducks and cockatoos. The event was followed by a bbq where volunteers consumed 18kg of organic sausages! Photo: Stephen Skinner 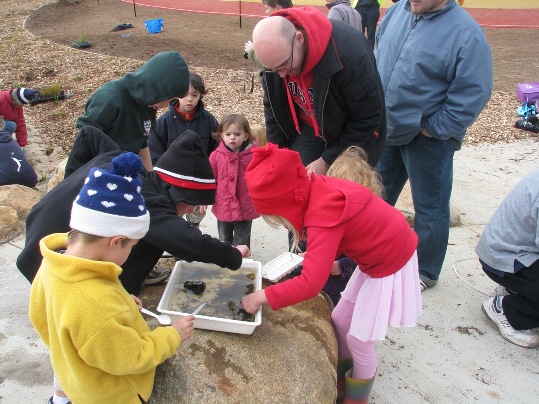 Looking at water bugs - water bugs or macroinvertebrates are a good indicator of how healthy a waterway is. Tree guards were made up ready to be installed around plants. Photo: Edwina Robinson Year 1 and 2 students from North Ainslie School were the first members of the public to view the wetland.

Students walked to the wetland in June 11. Photo: Edwina Robinson

Maned wood ducks quickly arrived after the wetland filled in May 2011 and a couple of black swans.  Wood ducks are grazers and consumed mass plantings of Carex and Juncus.  A range of measures were trialled to protect the plants including installation of bird netting and tree guards.

Local residents have spotted a number of other birds on site including:

One of the rarer visitors was a flock of Plumed Whistling Ducks in spring 2011.

The ACT Government and experts from the Dickson Wetland Carers are working on a brochure of birds commonly seen at the newly constructed wetlands.  The brochure will be available on-line in 2014.

Frogs quickly colonised the wetlands.  In October 2011, two local residents took part in the Frogwatch census with the Urban Waterways Coordinator. They recorded calls of:

Two other frog species have been recorded since then

During the 2013 Frogwatch census volunteers recorded the five species listed above.

ABC News Reporter, Kathleen Dyett visited the wetland during the Frogwatch census and compiled this report.

The Lyneham wetland was opened to the public in April 2012.  Like Dickson, it was planted with a diverse range of plant species. A Community Planting Day was held on 4 December 2011.  Volunteers planted 1200 native grasses and shrubs.

Read more about the Landscape Architects involved in the wetland design 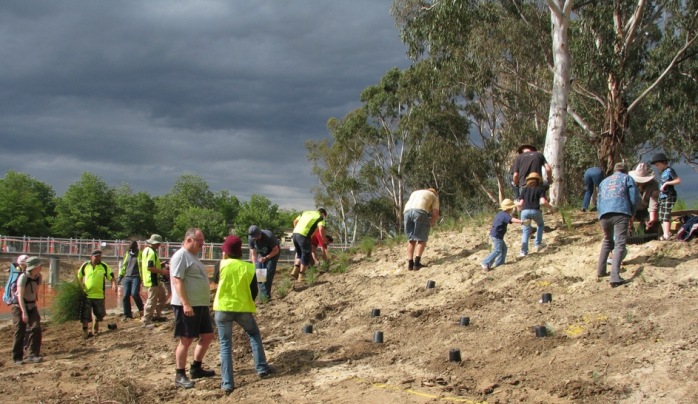 Planting the embankment with shrubs and grasses. Photo: Edwina Robinson 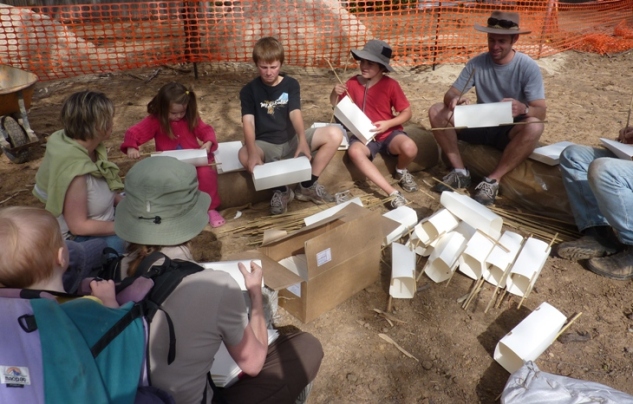 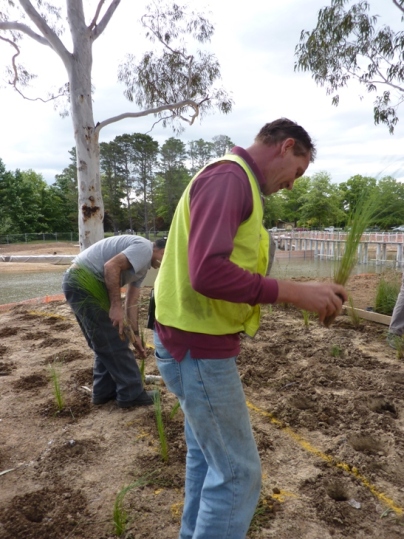 Have your say about Dog Exercise Areas at the Dickson Wetland

The staff from the Urban Waterways program worked with local schools to design tiles for the inner-north wetlands.  Students from Dickson College and Majura Primary created tile mosaics that reflect the wetlands.  The mosaics have been installed in the paving at the Dickson wetland.