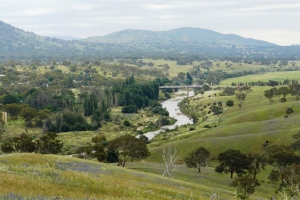 The Cotter River, Molonglo River and Murrumbidgee River and their major tributaries, are important aquatic and riparian ecosystems in the ACT. The ACT also has a number of natural and man-made wetlands and water bodies that provide important habitat.

One of our most important assets is the Ramsar Listed Ginini Flats Wetland Complex Ramsar Site within the Namadgi National Park. This site consists of a composite of subalpine sphagnum bogs and associated wet heath and wet grassland habitats that is listed as a nationally threatened ecological community. Ginini Flats is located at the northern biophysical limit of this habitat type and is of critical importance in maintaining the genetic and ecological diversity of a number of endemic and restricted species found in subalpine wet heaths and bogs. It is particularly important for the conservation of the endangered Northern Corroboree Frog (Pseudophryne pengilleyi), a globally endangered endemic species found only at high altitudes with a limited distribution. The Ginini Flats Wetland Complex is in the upper reaches of the Cotter River catchment, which is the primary water source for Canberra.

The natural environment has been changed by the construction of Lake Burley Griffin and the development of nationally and internationally significant wetlands and lakes, such as Jerrabomberra Wetlands. As migratory shorebirds face challenges of habitat loss, research conducted by the Woodland Wetlands Trust, in collaboration with Japan, will help Japan and Australia conserve the charismatic species such as the Latham's (or Japanese) Snipe (Gallinago hardwickii) into the future by gaining insights into its migratory land use.

The ACT Government maintains two lakes and 116 ponds and wetlands constructed within urban areas. Canberra's lakes and ponds are designed as 'settling ponds' to trap nutrients, soil, litter and debris, whilst improving the quality of water downstream. They also increase the biodiversity of an area by providing a sanctuary for plants and animals, improving visual amenity and creating a leisure area for the community.

Canberra's urban lakes, Lake Tuggeranong, Lake Burley Griffin and Lake Ginninderra are undergoing significant change due to their important environmental impact as they flow through such an urbanised landscape.

Transport Canberra and City Services (TCCS) manages Lake Ginninderra and Lake Tuggeranong which contain major recreational facilities for a range of ages including beaches, designated swimming areas, jetties, boat ramps for non-petroleum powered boats, BBQs and playgrounds. Zones have been determined for each water body which are based on water quality and ecological criteria. They form the basis for managing the water bodies throughout the ACT.

These rivers and wetlands provide important environmental and social benefits including: