Woodlands, grasslands, alpine bogs and riparian corridors are all a high priority due to their conservation values. They are classed as threatened ecological communities and / or contain a number of threatened species. They are a national priority and actions align with Commonwealth policy, funding and other initiatives.

The identified priority areas are based on evidence from a range of sources and investment priority takes into account current levels of resourcing. For example, some high priority areas are already well resourced and therefore being addressed to a large extent, whereas others are in need of further investment.

High quality, connected woodland areas across the ACT and region. Priority areas are guided by connectivity of woodland bird hotspots at the landscape scale. Hotspots have been identified, predominantly on private land, throughout Molonglo, the Murrumbidgee Valley and Googong. These are indicated in the adjacent Bird Restoration Hotspots 2016 to 2023 map (click image for larger view).

By enhancing and connecting habitat for woodland birds, many other woodland conservation objectives can be met. In this context, a multi-beneficial approach is taken.

Read about the underpinning science.

Future investment will target actions and partnerships that result in improved quality and connectivity of woodland bird hotspots in priority areas as a key focus. Any actions undertaken will also incorporate maintenance and improvement of the diversity of woodland plant species in line with the ACT Lowland Woodland Conservation Strategy (Action Plan No. 27), and will need to consider the implications of climate change, including the planting of appropriate provenance and species mixes to ensure the resilience of woodland ecosystems is maximised.

Bird corridors in the Monaro and Southern Tablelands have also been identified as important areas, and have been the focus of many years of protection and enhancement activities through Greening Australia, Landcare, private landholders and numerous other community groups.

The ACT Government is working with the CSIRO, the National Herbarium and others on provenance trials in response to Blakely's Red-Gum (E.blakelyi) dieback.

Well managed and restored grasslands across the ACT region ensure high value, functionality, and high acceptance by the community. The focus is on patches of Natural Temperate Grasslands, a highly endangered ecological community, habitat for threatened grassland species and potential areas of connectivity.

ACT grasslands vary in size, quality, composition of species, jurisdictional responsibilities and style of management. Investment will focus on management and restoration of grasslands managed by both government agencies and private lessees, to create greater community support, understanding and involvement in grasslands and encourage better grasslands management across the ACT region, including cross border areas. 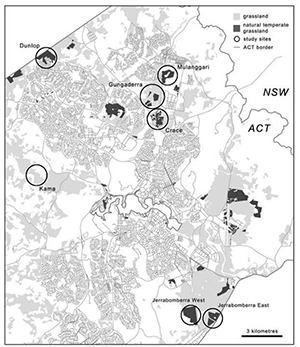 These actions for the ACT and region have been identified:

The ACT Government, universities and the community, have heavily invested in ACT Region grasslands since 1990.

A series of grassland reserves and open spaces have been created and are managed by the ACT Government and other agencies, and arrangements have been made with ACT rural lessees to manage grasslands for conservation and production. There are numerous ParkCare and Friends groups involved in grassland management along with significant grassland research and associated conferences and workshops.

The Canberra Nature Park Grasslands Enhancement Project has focused on trialling restoration techniques on degraded grassland areas to increase habitat heterogeneity for threatened species on 7 ACT lowland grassland reserves with some additional work on smaller remnants in the urban open space network. These programs aim to improve the condition of the Natural Temperate Grasslands and support increased populations of threatened species in these areas.

For over 10 years the Ginninderra Catchment Group (GCG) in partnership with the ACT Government have been trialling management regimes and generating information regarding best practice for native grasslands. They have also been implementing actions from the draft GCG Grassland Restoration Strategy to restore native grasslands in off-reserve areas throughout the Catchment.

To protect and enhance high quality bogs and fens in the ACT as important habitat areas for wildlife.

Alpine sphagnum bogs and fens in the ACT provide habitat for several threatened fauna species, including the Northern Corroboree Frog and a number of international migratory birds. 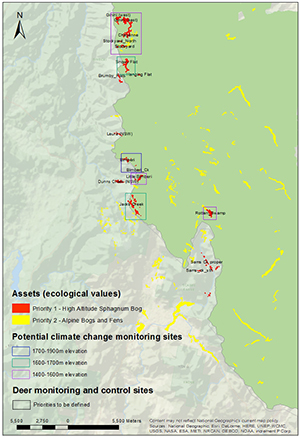 Bogs with the highest ecological value are considered the highest priority, and these sites have been identified for climate change ecological monitoring, vertebrate pest control, weed control, and visitor management. These are identified in the adjacent Bogs and Fens map (click image for larger view). Currently the impacts of feral pests and weeds are monitored, and management is undertaken on the basis of asset protection.

Underpinning science tells us that deer are a particular threat to alpine bogs, more so than pigs and other animals and are therefore a priority focus area.

Investment and cross-border collaboration with NSW will:

Actions will include the establishment of a long-term pest and weed control program and installation of visitor management infrastructure.

To protect, enhance and connect high quality riparian areas in the ACT as important habitat for threatened species and other wildlife, and to improve water quality.

Rivers and tributary streams and gullies in the ACT. Priority areas are outlined in the ACT and Region Catchment Strategy and align with the Natural Resource Management Investment Plan.

The ACT Aquatic Species and Riparian Zone Conservation Strategy has guided initiatives to address riparian degradation in the ACT. ACT Rivers - Highlights from the Last Three Years contains a summary of these activities.

There have been many additional riparian rehabilitation projects undertaken by Ginninderra Catchment Group, Molonglo Catchment Group, Southern ACT Catchment Group and Greening Australia. Activities include erosion control, revegetation, willow control and fencing for protection. Works have been undertaken in partnership with the community on both public and private land.

One example is the Molonglo River Restoration Project undertaken by Molonglo Catchment Group in partnership with the ACT Government. This project resulted in the control of almost 70ha of weeds, and undertook 45ha of revegetation to enhance and connect important riparian vegetation along the Molonglo River.