To support recovery of threatened species listed in the Australian Government Threatened Species Strategy that occur in the ACT. This national strategy identifies 20 mammals, 20 birds and 30 plants.

Investment will focus on areas where threatened priority species exist in the ACT, or where there is an opportunity to expand their range. Occurrence records of threatened species in the ACT are indicated in the adjacent Threatened Species Prioritisation map.

The following threatened species have been listed in line with the National Threatened Species Strategy:

The Eastern Bettong and Eastern Quoll are extinct from the wild in the ACT and therefore do not have specific Threatened Species Action Plans. However, they have been reintroduced into Mulligans Flat Woodland Sanctuary as part of a research and conservation program.

Activities for recovery of threatened species are guided by ACT and National Action Plans. It is recognised that management of some of these species requires cross-border collaboration in partnership with the NSW Government.

Consultation for the Natural Resource Management Investment Plan identified that many of the Threatened Species in the ACT were already receiving investments through other sources and that:

Threatened Species Action Plans outline conservation and protection proposals for the species or community concerned or proposals to minimise the effect of threatening processes. The primary objective is to maintain for the long term, viable, wild populations of each species, or samples of the ecological community, as components of the indigenous biological resources of the ACT. 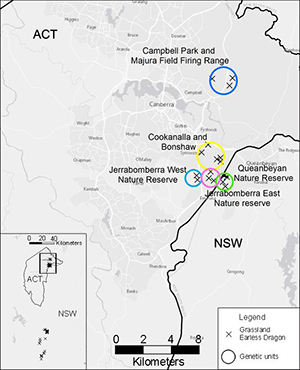 The adjacent map shows the locations of known populations of Grassland Earless Dragons. Sites for possible species reintroduction will be dependent upon the genetics of the individuals to be translocated either from a captive colony or between wild populations, on the availability of appropriate habitat and quarantine considerations.

The Grassland Earless Dragon is a endangered species that once occurred across grasslands from Bathurst to Melbourne, but is now only found in a few remnant grasslands in the ACT and the nearby Monaro Plains in NSW.

In the ACT, populations were significantly impacted by overgrazing and drought from 2006 to 2008. As a consequence, populations dramatically declined and some have even been lost. Recovery of remaining populations will depend on appropriate management of habitat, however suitable habitat may remain unoccupied due to localised extinction and a lack of connectivity to extant populations. Reintroduction may be the only option for recovery at these locations of potential habitat. As part of the reintroduction strategy, Captive Breeding facilities could be developed and housed in a university or government breeding facility. To support the recovery of this species, ACT NRM will seek to support:

The ACT Government, University of Canberra and other researchers have invested significant efforts into captive breeding and genetics research, but have yet to achieve a level of breeding success that will support a captive breeding population and translocation in the future. Improved condition of known Pink-tailed Worm-lizard habitat, particularly river corridors, and identification of other PTWL hotspots in the ACT and surrounding areas as appropriate.

These are based on Pink-tailed Worm-lizard occurrence, weed data, and expert opinion. The map has also identified priority areas for further surveys in areas that may potentially contain populations of Pink-tailed Worm-lizard, and survey effort of these sites that are threatened by weed invasion will be further prioritised.

Known populations of Pink-tailed Worm-lizard are closely monitored and significant habitat restoration is currently occurring in environmental offset areas including the Molonglo Corridor.