Protecting and Connecting Endangered Woodlands in the ACT

Box-Gum Woodland in the ACT

Much of the lowland woodlands of the ACT are comprised of Box-Gum Grassy Woodland which is a Threatened Ecological Community, both in the ACT and nationally. The ACT has some of the best quality patches of this habitat type in Australia. It is found on public and rural leasehold land throughout the ACT and is generally in an intact condition with a diverse ground layer, mid story shrubs and large hollow bearing trees.

Patches of Box-Gum Grassy Woodland are home to a range of threatened and declining woodland species such as the Superb Parrot, Brown Treecreeper , Scarlet Robin, Button Wrinklewort and the Small Purple Pea.

While the ACT has had some success in conserving Box-Gum Grassy Woodland, fragmented patches are highly vulnerable to threats such as weed and pest animal invasion, altered fire and grazing regimes. In addition, isolated paddock trees are declining at a rapid rate, due to natural ageing, dieback and low rates of regeneration, all of which are exacerbated by a changing climate.

Over the next five years, up to $1.5 million in funding will be available through the Australian Government’s National Landcare Program to undertake 900ha of on-ground works on Box-Gum Woodland, predominantly on rural leasehold land in the ACT. These works include re-vegetation, weed control, pest animal control and provision of grazing advice.

Over the course of the project, up to 45 landholders, and at least 14 community groups will be actively engaged in managing Box-Gum Woodland which will ensure medium to long-term management of this threatened ecological community.

Targeted recruitment and replacement of isolated paddock trees will be undertaken on 30% of ACT rural properties to:

This project will lead to an improvement in the condition of the Threatened Ecological Community and will also benefit threatened and declining woodland birds and threatened plants dependent on Box-Gum Woodland.

Ongoing protection of Box-Gum Woodland across the ACT will improve the ability to adapt to future climate change threats and contribute to broader national conservation efforts of this Threatened Ecological Community.

Safe Haven for quolls and bettongs in the ACT 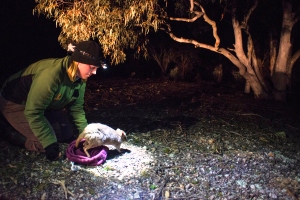 The Eastern Quoll and Eastern Bettong have become extinct in the wild on the Australian mainland, in part due to habitat clearance and introduced predators. Sanctuaries are the only type of intervention that is demonstrably working at halting declines of mammals, preventing extinctions and enabling reintroductions of native fauna safe from predators such as foxes and cats.

The Mulligans Flat Woodland Sanctuary (the Sanctuary) is an innovative program based on the best available science. It was established to provide a haven for the Box-Gum Woodland Threatened Ecological Community and its dependent threatened species, where they can thrive and 'wilderness' can dominate.

Since 2012, four species have been reintroduced to the Sanctuary, including the Eastern Quoll and Eastern Bettong.

Reintroducing quolls and bettongs to the new Sanctuary

Over the next five years, up to $800,000 in funding will be available to enable reintroduction of the threatened Eastern Quoll and Eastern Bettong into the expanded Sanctuary.

Preparation for reintroduction of quolls and bettongs will involve eradicating pest animals (rabbits, hares, foxes, cats) from the Sanctuary by 2021. A network of wildlife cameras will initially monitor the presence and abundance of pest animals to inform control activities and confirm pest eradication. Cameras will also monitor native wildlife to ensure there is enough prey available for Eastern Quolls.

Following eradication, native species such as Eastern Quolls and Eastern Bettongs will be reintroduced into the Sanctuary from 2022 onward.

Over the course of the project at least 500 volunteers will be engaged to assist in monitoring through reviewing camera footage, thereby increasing community awareness of the Sanctuary and the plight of endangered mammals.

The project will foster indigenous culture, knowledge and awareness by using an Indigenous ranger to establish and maintain the camera network, maintain the feral-free enclosure and engage the Aboriginal and non-Aboriginal community.

By 2023 the reintroduction of these animals, monitored by an annual mark/recapture program, will improve the trajectory of these threatened species and enhance the ecological function of the Box-Gum Woodland Threatened Ecological Community within the new Sanctuary. This project will add to the body of successful ecosystem restoration achieved at the Sanctuary over the last decade.

Under the National Landcare Program Phase 2, ACT Natural Resource Management and the ACT Parks and Conservation Service will deliver this project in partnership with the Woodlands and Wetlands Trust.

How can you be involved?

Mulligans Flat Sanctuary has a variety of ways to be involved through its volunteer program, including assisting with monitoring through reviewing footage from the camera track network.

A specially designed program, Secret Life of Critters at Mulligans Flat, will target school students and enable them to be involved in reviewing the camera footage whilst learning about the plight of our native species. A variety of specialty Cultural Tours will be led by Aboriginal guides from the Woodlands and Wetlands Trust to share information on the cultural and ecological values within the Sanctuary and next steps with the new Sanctuary.