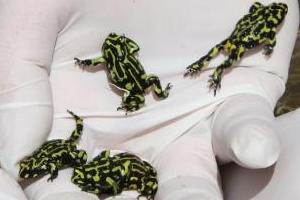 In the ACT it is estimated that only a handful of Corroboree Frogs remain in the wild from original populations, due to the introduced pathogen, the Amphibian Chytrid Fungus, which has affected frogs worldwide.

Each ring-tank houses around 50 adult Northern Corroboree Frogs, together with a sphagnum moss pool for breeding and raising tadpoles.

The ring-tanks contribute to increased capacity and quality of ex-situ breeding facilities for Corroboree Frogs, enabling frogs to be raised under more natural conditions, leading to improved fitness for release to the wild, and potentially enabling an additional 90 frogs to be released to the wild annually.

The Molonglo Catchment Group and ACT Parks and Conservation Service are successfully revegetating previously cleared areas along the Lower Molonglo, including more than 200 hectares of revegetation works, with over 20,000 trees and shrubs.

The ongoing project aims are to enhance the extent and condition of native vegetation in this degraded area to retain its ecological values by: 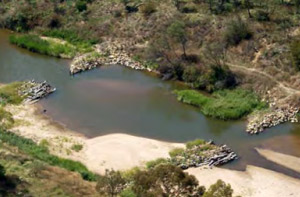 The Tharwa Fish Habitat Project has contributed to the rehabilitation of a 100 kilometer stretch of the Upper Murrumbidgee River near Tharwa, to enhance native fish populations.

Native fish populations in the Murrumbidgee River are estimated to have fallen to 10% of pre-European levels. Large amounts of sediment have been deposited in the river system following land clearing of the Monaro region for livestock grazing, flooding and erosion.

The project was funded by the Australian Government, ACT Government, Murray–Darling Basin Authority, and Icon Water. It enabled two engineered log jams to be introduced and some existing rock groynes enhanced. The artificial habitat structures increased river channel depth past the structures and improved native fish passage and habitat in the area. Post project surveying found that Murray Cod were the dominant species around the log jams and groyne habitats and in rocky areas.

Revegetation and weed control along the river bank has also complemented native habitat.