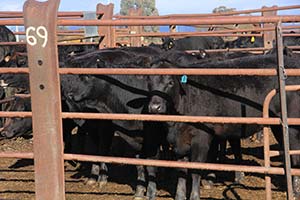 Diseases that affect production are very important as they impact heavily on producers financial returns but none more so than those diseases which affect reproductive performance. Leptospirosis is one such disease that occurs sporadically in cattle herds especially in association with wet weather.

Leprospira are small spiral shaped bacteriums having in excess of 200 strains. The two most important strains affecting cattle are L. Pomona and L. hardjobovis. Both these strains are also known to affect humans, so this disease has significance for rural occupational health and safety.

The organism resides mainly in the kidney of cattle but in females it also resides in the reproductive tract. It can be carried in the animal for long periods and shed during urination, birth or abortion. Other important sources of spread include contaminated water, feed, soil and pasture. Animals and humans can contract the disease by entry of the organism through the mouth, eyes, nose, broken skin, contaminated water or aborted foetuses and afterbirth. Infection of both animals and humans would require protective and intervention measures in these areas.

The organism can survive in the environment for extended periods provided the surrounds are moist, hence the ability for the disease to suddenly appear and spread in wetter years. Spread can also be assisted by shedding waters during floods, heavy rain or run off.

Some apparently healthy animals act as ongoing carriers of the organism. Other livestock on a farm can also contract this disease with sheep, goats and horses also being susceptible but to a lesser degree.

The signs of Leptospirosis in a cattle herd vary depending on the strain. Both strains cause abortions in cattle usually in the last trimester of pregnancy (greater than five months gestation). The abortions can be seen as dramatic known as “abortion storms” if the herd has had little previous exposure to the disease. These abortions occur several weeks after exposure to the organism and build up in the reproductive organs.

The abortions may subside as the disease passes through the mob and immunity builds up. However immunity is not sustained and the disease will eventually reappear in a cyclic fashion demonstrating various degrees of impact. Immunity will also only develop for the specific strain.

L. Pomona has an additional affinity for pigs and calves. This strain will cycle through the feral pig population and they act as an on going reservoir of infection. Calves demonstrate high fevers, jaundice and excrete red-brown coloured urine. Hence the common name of red water given to this particular strain of the disease. L. pomona can be fatal to calves.

Diagnosis is usually by a blood sample as this can be obtained at any time. However samples such as aborted foetuses, afterbirth or cultures from urine can also detect the disease but are not so readily obtained.

Control and prevention through vaccination is the most economical option. Leptospirosis vaccine is commercially available in the bivalent or two strain form and is also available in combination with the normal clostridial disease vaccines. These combinations are a real savings from a management and labour aspect.

In unvaccinated mobs initial vaccination requires two shots 4-6 weeks apart followed by an annual booster. New introductions onto the property require the same program prior to introduction to the herd.

For continued immunity cows and heifers should be vaccinated 4-6 weeks prior to calving to give the best immunity to the calf.

Herds under a high level of threat may require the annual booster vaccination interval reduced to 6 months to infer adequate immunity.

Vaccination while preventing the infection may not completely eliminate the organism from all animals under all circumstances.

What is the Cost?

This disease not only produces production losses but can have an enormous impact if people contract the disease. In humans the disease causes severe flu like syndromes and in very severe cases will involve neurological complications. Mild cases may recover in 1-2 weeks whereas severe cases may mean the inability to work for months.

While everyone does not suffer the same economic losses some figures suggest the following financial parameters.

For calves saved, estimates of 1% of calves saved covers the annual cost of vaccination. Or for adult stock for a break even point the cost of vaccination for 5-7 years being equivalent to saving (loss of animals) to the value of $1000. These figures are only estimates and will obviously fluctuate with price variations, but they demonstrate the value of considering vaccination if Leptospirosois is detected in a herd.