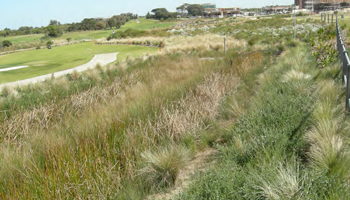 A new rain garden in the open green space around the Flood Memorial site in Woden will play a role in improving water quality in Yarralumla Creek and add to the commute for the many cyclists who use the nearby bike path every day.

Dry most of the time, a rain garden looks just like a garden on the surface but has a storage and filtration structure underground to reduce the amount of harmful nutrients in stormwater.

Water will be diverted from existing underground stormwater drains, with the treated water returned to Yarralumla Creek which, in turn, flows into the Molonglo River.

During major storm events the maximum water depth will be 30cm. Dense planting will deter people, including children, from entering the water.

Some deciduous trees were removed but have been replaced with evergreen trees to limit autumn leaf drop, which are harmful to our waterways.

A 250m length of existing cycle way has also been widened from 2.5m to 4m as part of this project.

Careful design has ensured that the size of the rain garden is proportionate to the amount of available water during low-flow periods, making it as efficient and cost-effective as possible.

Each year it will remove over 61,000 kilograms of nitrogen, phosphorous and suspended sediment from stormwater run-off.

Some areas of the site may remain closed to allow for plants to establish.

During the final design phase, some changes were made to the original concept designs to avoid the need to relocate an array of underground utilities and services and to limit the removal of established trees.

Find out what you can do on your own block to improve water quality in our lakes and waterways.