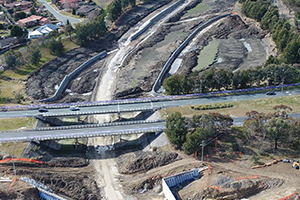 Construction on the first ACT Healthy Waterways project – two new wetlands at Isabella Pond - was brought forward to coincide with the upgrade of Isabella weir and to limit the impact of construction activity on residents.

The wetlands will attract birds and other native wildlife and provide more opportunities for recreation. They will also play an important role in improving water quality downstream in Lake Tuggeranong, the Murrumbidgee River and the wider Murray-Darling Basin.

Isabella Pond and the adjacent Upper Stranger Pond were drained in March 2017 to allow for the works to commence. This ‘dewatering’ offered a unique opportunity to remove carp, an introduced freshwater fish listed as a pest species.

The wetlands will remove over 462,000 kilograms of nitrogen, phosphorous and suspended sediment every year from urban stormwater destined for Lake Tuggeranong.

Watch a video of carp being removed from Upper Stranger Pond

Read the news release about the carp eradication program in Tuggeranong

Find out about the National Carp Control Plan