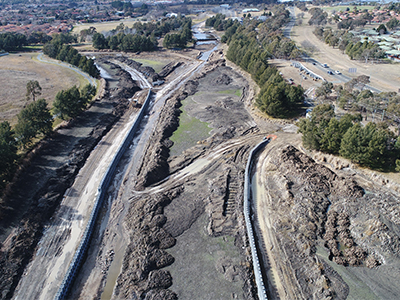 The ACT Healthy Waterways team was recognised for excellence in planning at the recent Stormwater NSW Awards.

The 2017 NSW Award for Excellence in Strategic or Master Planning was one of only two excellence awards given at the annual conference. The project will now be an automatic entry into the National Stormwater Awards for Excellence to be announced in October 2018.

In accepting the award, ACT Healthy Waterways Program Manager, Justin Foley, paid tribute to the many people involved in the Project.

“This is a joint initiative of the Australian and ACT governments to improve the quality of water entering the region’s lakes and waterways and flowing into the Murrumbidgee River system.

“Working to a fixed budget and a fixed timeline, effective planning was critical and, as a result, we engaged with stakeholders early and often.

“We took a truly collaborative approach to the planning process, setting up project advisory groups that included scientists, industry specialists and members of the community.

“Although the priority has always been water quality, we also took into account important matters like operation and maintenance and the lifecycle of each asset to determine which would progress,” said Mr Foley.

Construction on the first project – two new wetlands at Isabella Pond in Tuggeranong - has already begun, with the next package of projects expected to roll out before the end of 2017.