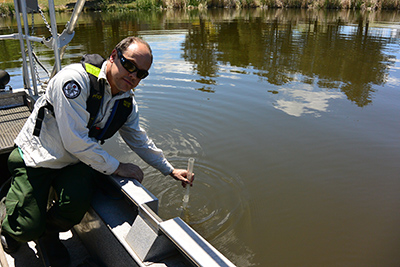 ACT Government aquatic ecologist, Matt Beitzel, who spent three days wading through sediment to catch and remove 2.6 tonnes of carp, is worried people may release carp or other non-native pest fish into the healthy pond, either accidentally or deliberately.

“We know it happens. It could be kids moving Gambusia, thinking they’re tadpoles, from a backyard pond to a creek or a fisherman with a fondness for a particular type of fish releasing fingerlings illegally. Often people will get rid of unwanted ornamental fish (like goldfish) by putting them into a local pond.

“Non-native and pest fish can do a lot of damage. They degrade the natural environment, spread disease, prey upon the native fish and compete with them for habitat and food,” said Beitzel.

The carp were removed from the pond when it was drained in preparation for the construction of new wetlands in Isabella Pond and the widening of the weir.

“It was dirty, tough, labour-intensive work but the results are worth it,” said Beitzel.

Recent testing in Upper Stranger Pond indicated very low turbidity levels (5.3NTU*) which is a good indication of water health. Prior to the carp eradication exercise, turbidity levels were above 20NTU. Regular monitoring at Point Hut Pond, where carp are prevalent, averages 25NTU.

“Carp are bottom feeders and they stir up the sediment. Locals will notice how clear the water is in Upper Stranger Pond now the carp are gone and I’m hoping they will help us look after it. Keep rubbish and chemicals out of the stormwater system and, whatever you do, please don’t release fish into any waterway,” said Beitzel.

The next step is to place logs in the pond to create habitat for native birds, fish and other aquatic animals like turtles. The pond will then be re-stocked with native fish.