For around 4,000 years, dingoes have been performing the role of higher order predator in Australian ecosystems. Dingoes influence other animal populations, particularly the ones they prey on, including both native and non-native species. It is thought they also help suppress other predators such as the introduced red fox and cat, thus playing a role in maintaining biodiversity.

Can you tell the difference between a dingo and a wild dog? The fact is, pure dingoes cannot be distinguished from part dingoes in the field so they are managed as a single entity—wild dogs. In Namadgi National Park, the wild dog population can best be described as dingo with a small proportion of domesticated dog genes. The domestic dog genes came from animals that have escaped, or been released over the last 200 years and have bred with dingoes in the wild.

Since early settlement, dingoes were a threat to sheep in this area. Some pastoralists at Gudgenby ran only cattle while others shepherded sheep by day and penned them at night. The remains of a netting dingo fence can still be seen at Orroral. Today wild dogs are controlled in areas adjoining rural properties in order to protect livestock. However, in core areas of Namadgi National Park such as the Gudgenby Valley and the Cotter Catchment, they are protected.

In order to protect livestock, control of wild dogs is undertaken in areas of Namadgi that adjoin rural properties. Incidents of wild dogs in Namadgi National Park interacting with people are extremely rare. However, it is sensible to take precautions to discourage these animals from gradually becoming less fearful of humans. 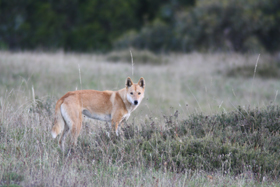 If you encounter a wild dog in Namadgi National Park, remember it is a wild animal that is not used to humans. Use the binoculars or your camera zoom to get a closer look but do not physically approach an animal or try to feed it. If a wild dog approaches you then face the animal, fold your arms whilst keeping eye contact and calmly back away. Never run as this may excite it into closer contact. In the unlikely event of threatening behaviour, strike the animal with a stick or backpack. Report any threatening encounters to Access Canberra or the Namadgi Visitor Centre.

Never feed wild dogs, even indirectly. Wild dogs may become accustomed to people if visitors are not careful with food scraps and stores. Please abide by the following rules:

If you encounter a wild dog, keep yourself safe by always staying near your children; walking in groups; and watching the dogs quietly from a distance – do not excite or coax them.

If you feel threatened by a wild dog:

Do not run or wave your arms.

Please report any incidents concerning wild dogs to the Namadgi Visitor Centre on 6207 2900 or Access Canberra on 13 22 81.