Corroboree Frogs have a restricted distribution to high altitude areas, where they breed in waterlogged areas such as sphagnum moss bogs during summer, and spend winter in the surrounding woodland. There are two closely related species of Corroboree Frog:

Adult Corroboree Frogs are only two to three centimetres long, have distinctive black, yellow and white markings on their backs, and are recognised by their short ‘squelch’ calls.

Both species of Corroboree Frog suffered severe declines in numbers during the 1980s and numbers continue to dwindle. Both species are listed as threatened nationally and in each State/Territory where they occur. There is a worldwide decline in frog numbers believed to be due largely to disease caused by the introduced Chytrid fungus. Drought may have also exacerbated the situation for Corroboree Frogs.

Between January and early March, females lay approximately 25 eggs, a small number compared to most frog species. In contrast, Cane Toads (Bufo marinus) can lay around 20,000 eggs. The eggs are laid out of water in sphagnum moss or other damp vegetation next to a pool. The eggs develop slowly over autumn to an advanced tadpole stage, which then hatch when pool levels rise from heavy rain or melted snow and flood the nest. After several weeks of feeding and growing in the cool clear pools, the tadpoles metamorphose into juvenile frogs during spring or summer. 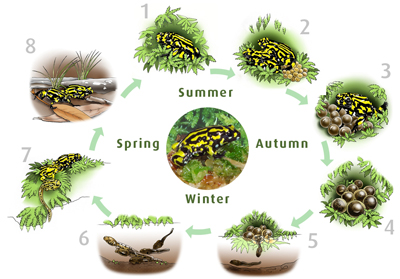 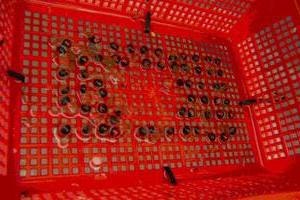 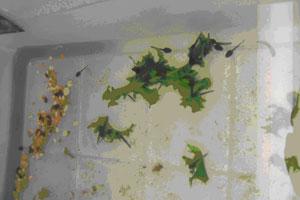 Breeding and raising Corroboree Frogs in captivity, where conditions can be controlled, results in a far higher survivorship rate than in the wild. Apart from Chytrid fungus, one of the greatest sources of mortality in wild populations is variable or low rainfall. Insufficient rainfall or snow can result in eggs not hatching (because pools don’t flood the nests) or pools drying before tadpoles can metamorphose. There are currently over 1,000 Northern Corroboree Frogs in the captive population at Tidbinbilla, which is many times more than exist in the wild in the ACT (estimated to be less than 50 individuals). 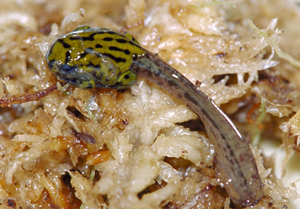