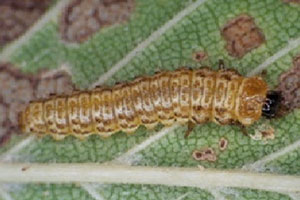 Life cycle
How will the Elm Leaf Beetle affect Elms?
What can I do on my property?
Report infestations on trees on public land

The Elm Leaf Beetle (Pyrrhalta luteola) can defoliate an elm tree in a week if untreated and currently poses the greatest threat to the elm tree population in Australia. First detected in Australia in 1989, it has now spread throughout Victoria and several cases have been reported in the ACT. 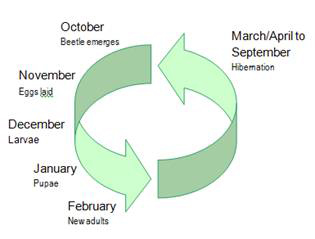 How will the Elm Leaf Beetle affect Elms?

Although heavy beetle infestations can completely defoliate an elm, this does not occur until late summer to early autumn. The elm will send out new leaves in the next season. However, the growth of the tree will be affected and ultimately the beetle may lead to its demise. Reducing Elm Leaf Beetle populations will help reduce the damage they cause to Elm trees.

Experiments at the Keith Turnbull Research Institute showed that banding can be effective in reducing the damage to leaves by more than 50% in the case of English Elms, over a three year banding program, if applied at the right time in the life cycle.

What can I do on my property?

Caring for the tree

A healthy elm is less likely to be devastated by the Elm Leaf Beetle. Remember to:

Trunk banding is the simplest way of breaking the life cycle of the Elm Leaf Beetle. By observing the growth of the larvae and placing a sticky band around the trunk(s) of the elm tree prior to the descent down the trunk (usually around Christmas time), significant numbers of larvae can be killed. Commercial bands can be sourced from horticultural suppliers.

There are a number of chemicals registered for the control of Elm Leaf Beetle that can be applied either as a foliar spray or soil drench/ injection. When using chemicals always be sure to read the label first and abide by the guidelines. Please discuss with staff at your local garden centre.