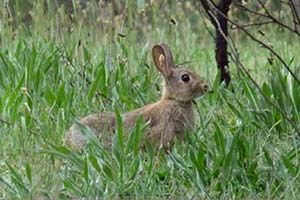 As part of a national rollout, a new strain of calicivirus will be released into two populations of pest rabbits in the ACT in March 2017 to help control their numbers.

The release of a Korean strain of Rabbit Haemorrhagic Disease Virus, known as RHDV1 K5, is part of the national rollout of the disease across more than 600 sites in Australia. The rollout is being coordinated by state and territory governments across Australia.

RHDV1 K5 will be released into an area of Namadgi National Park and on land adjacent to Mulligans Flat Nature Reserve. Both areas have a long history of rabbit problems.

Extensive research has shown that RHDV1 K5 only affects the European rabbit and cannot harm other animals, even those that eat the rabbits.

It is recommended that domestic rabbit owners vaccinate their rabbits prior to the release of RHDV1 K5 and/or ensure their animals’ vaccinations are up-to-date. Additional protection against calicivirus and myxomatosis can be achieved by keeping rabbits in insect-proof enclosures or inside.

Rabbits are a serious environmental pest as their grazing results in a loss of vegetation and their warrens contribute to soil erosion. Grazing by rabbits threatens the survival of native birds, mammals, and insects that rely on plants for food and shelter. Rabbits have contributed to the extinction of many native plant and animal species. Rabbits compete with livestock for available pasture and kill young trees and shrubs. If left uncontrolled, rabbits will further invade surrounding land including back yards, causing more damage to the environment and private property.

Canberra residents may have noticed an increase in rabbit numbers in the past few years. This is not a localised problem. Rabbit populations all over Australia are increasing as these pests build resistance to rabbit calici disease and myxomatosis. In an effort to reduce rabbit numbers, the rabbit calici disease virus was introduced into parts of Canberra in 2007. However, this was unsuccessful and an integrated rabbit control program was undertaken in early 2009 at Majura Nature Reserve, Watson Woodlands and adjacent to the Hackett Horse Paddocks.

An integrated program uses recognised control techniques including the fumigation of rabbit warrens with phosphine gas and the poisoning of surface rabbits using pindone carrot bait. In open areas where access is available, a bulldozer may be used to rip rabbit warrens to remove the harbour. The program is undertaken in a manner that limits the risk to native animals. If a warren is known to be occupied by a non-target species, fumigation will not be performed. Pindone carrot bait will be laid in a manner that restricts access by native animals including kangaroos.

Pindone is widely used throughout Australia to control rabbits in urban areas because it has a readily available antidote. It is unlikely a dog would receive a toxic dose of pindone poison through eating poisoned rabbits (secondary poisoning). However, dogs may be susceptible to primary poisoning if they eat the poisoned bait (carrot or oats). Therefore it is important that dogs remain on leads in areas where rabbit control work is being undertaken. There is very little risk to cats as they would need to eat the majority of a dead rabbit each day for several days to be affected and are unlikely to consume carrot or oats. In order to minimise the risk of secondary poisoning, all visible rabbit carcasses are removed every 12 days after poisoning commences. In the event of a domestic animal showing symptoms of pindone poisoning (vomiting, bloody fluid in the mouth, blood in the faeces), antidote is available from most veterinarians. It consists of an injection of Vitamin K1 (1mg/kg liveweight) which counteracts the effects of pindone in the body. Fumigation of warrens poses little risk to domestic pets and is considered one of the most target specific means of managing rabbits.

The Parks and Conservation Service acknowledges the assistance of the Park Care group Friends of Mount Majura who volunteered many hours of mapping and marking rabbit warrens in the area.