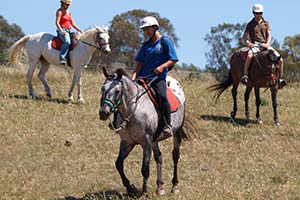 Australia is officially free from equine influenza. Moving horses anywhere in Australia does not require movement statements. If you suspect equine influenza in your horse phone the 24 hour Emergency Animal Disease Hotline on 1800 675 888.

Equine Movement Statements are not required to move horses into or around the ACT. Event registration in the ACT is voluntary. Information provided will only be used in case of a disease outbreak.

The main signs of equine influenza are a sudden increase in temperature (39-41°C), a deep, dry, hacking cough, and watery nasal discharge which may become thick and smelly later. Other signs can include depression, loss of appetite, laboured breathing, and muscle pain and stiffness. 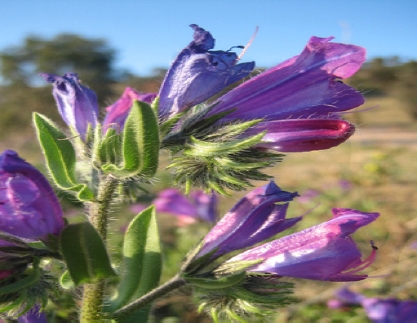 Paterson's curse (Echium plantagineum) was introduced into Australia as an ornamental garden plant in the 1850s, but quickly became naturalised, especially in pastoral regions. Paterson's curse is a winter annual or occasionally biennial herb which grows vegetatively as a rosette before producing one or several flowering stems in spring. Most seed germination occurs between mid summer and late autumn, although it may also occur at any other time of the year. Flowering stems are produced in late winter/early spring. Flowers and seed are produced from spring to early autumn.

Paterson's curse is toxic to horses due to a compound contained in the plant known as 'pyrrolizidine alkaloid'. Paterson's Curse contains up to 10 individual types of pyrrolizidine alkaloid (PA) toxins and when horses eat it, toxins react within the body causing cells to die, preventing normal cell activity and damaging blood vessel tissue. The liver is highly susceptible to damage from the PA toxins, although cells in the entire body are also affected. Horses react differently to Paterson's Curse due to the various PA toxins and the different ways they can attack the body tissue. The two recognised forms are an acute form (less common) where death may occur over two to three weeks and the more common chronic form where death and symptoms may take months to display themselves, even after the horse is removed from the plant.

Paterson's Curse becomes a major problem following a season characterised by a lack of pasture, such as occurs after drought or fire. At the return to a normal season there is little initial competition and the Paterson's Curse germinates unchallenged and become the dominant species. As the rosette stage of Paterson's Curse is the first green pick, it is almost impossible for horses not to have some intake if pasture grazing. It should also be recognised that grazing Paterson's Curse over a number of years does cause gradual and accumulative liver damage that can be exacerbated in a year where Paterson's Curse has flourished.

Death may be sudden - occurring within two to three weeks with little prior evidence of illness. The clinical signs may include a mild change in behaviour, especially becoming quieter. A change in feeding behaviour, like eating less or being selective, respiratory distress and fluid build up in the abdomen. On post-mortem the liver appears enlarged with a dark bluish black colour and mild hydrothorax and ascites.

This toxin can affect the liver, lung and the kidney but has a predilection for liver cell damage. Hence a comprehensive liver function test (supported by a history of PC exposure—noting that the history can occur over a number of years and clinical signs), is the most likely and practical diagnostic tool. A whole blood sample should be collected for a full liver function test and this may need to be repeated to establish if the profile is increasing or declining.

Due to the acute nature of the disease, little successful treatment can be undertaken and death may occur without an adequate response period. Intensive hospital treatment may prevent death. Restrict access immediately to the plant and reduce the workload on the liver by supporting with a diet low in protein, high in carbohydrate with vitamin supplements. Restrict any chemical intake that is processed via the liver and seek professional advice.

In the chronic form, death may occur after an extended period or not at all if successful intervention occurs. The clinical signs are slower to progress. The early condition indicates a decrease in appetite or selective feeding with a quieter than normal behaviour, even depressed with a decrease in fitness. This can be followed by a more intermittent condition exhibiting signs of body weight loss, more severe loss of appetite, slight jaundice, fluid build up in the abdominal cavity, occasionally photosensitisation and mild neurological symptoms such as a slightly abnormal stance and uncoordinated movements. The advanced condition may involve obvious body weight loss, jaundice, uncoordinated movement, abnormal stance, head and neck muscle twitching and apparent blindness. The associated neurological conditions are associated with a build up of blood ammonia levels due to an incapacitated liver. On post-mortem the liver is contracted, slightly darker or mottled with lighter coloured zones and ascites.

This toxin can affect the liver, lung and the kidney but has a predilection for liver cell damage. Hence a comprehensive liver function test (supported by a history of PC exposure - noting that the history can occur over a number of years and clinical signs), is the most likely and practical diagnostic tool. A whole blood sample should be collected for a full liver function test and this may need to be repeated to establish if the profile is increasing or declining. The interval of testing for the initial stage is approximately four weeks. This may require a re-evaluation if the condition worsens.

Due to the chronic nature of the disease successful treatment can be undertaken. In all circumstances restrict access to the plant and for the initial stage this may be all that is required. However it is also advised to observe some restraint in the diet to support the liver's recovery. Later stages require constant monitoring, dietary support and chemical restraint as noted in the acute phase with hospitalisation in severe cases. Professional advice should be sought in line with a liver function test.

During World War 1 Strangles was a feared disease as the army depended heavily on its mounted infantry. The close confinement of large numbers of horses sharing common watering and food facilities could result in this highly infectious bacterial disease running rampant through a population of horses.

Today the disease is less common but not less debilitating. The disease first appears as inappetance, high temperature and lethargy which later progresses to swelling around the throat region as the mandibular and pharyngeal lymph nodes enlarge. Theis swelling forms abscesses which can rupture and discharge pus, this is often accompanied by a purulent nasal discharge. These discharges are the main source of contaminate to other horses. In unusual cases abscesses also form in a number of other locations including the lung, liver and surrounds of the eye. When this happens the disease is referred to as 'Bastard Strangles'.

Young horses in the age group of 1-5 years are usually more susceptible. A horse previously infected but showing no clinical signs may continue to act as a source of infection for 1-2 months even extending to 8 months. Once an outbreak has been suspected those horses displaying early clinical signs should be immediately isolated. Isolation should continue for a minimum of 4-5 weeks following disappearance of the signs. In addition, personal hygiene is of the utmost importance as any object contaminated with discharge can become a source of continuing infection.

The disease is confirmed by a culture of the bacteria 'Streptococcus equi' using a swab taken from an abscess or nasal discharge. To give some assurance that the animal is clear of the disease three repeat negative swabs taken at 7-10 day intervals are recommended. Treatment involves drainage of the abscess and a course of antibiotics extended for 5-7 days after the clinical signs have resolved. Early stoppage of the antibiotic treatment may result in a reoccurrence of the disease.

Vaccines are now available and assist in the reduction of the disease. The best vaccination program for increased immunity involves an initial dose followed by annual boosters. Vaccinated horses can still succumb to the disease but have milder symptoms.