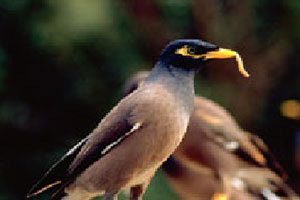 Indian (or Common) Mynas are medium sized brown birds with a black head and yellow feet, eye-patch and bill. They occur naturally in open woodlands from Afghanistan through India to Indochina, and were introduced into Australia in 1862 to control insects in Melbourne market gardens and then Sydney, and from there they were taken to North Queensland to combat cane beetles. The Indian Myna was introduced to the Canberra region in 1968 where they have shown a distinct liking for urban backyards and woodland nature reserves. They are strong competitors with native wildlife for food and nesting hollows and are now well established in almost every Canberra suburb.

Indian Mynas are very aggressive and intelligent, and known to evict native birds (including parrots, kookaburras and peewees) from their nests, dumping out their eggs and chasing them from their roosting areas. In urban habitats they are considered a threat to the long-term survival of these birds and other native species such as sugar gliders which depend on tree hollows for survival. They are also suspected to contribute to the spread of certain weed species such as Bitou Bush in other parts of Australia.

Surveys of Indian Mynas undertaken by the Canberra Ornithologists Group have demonstrated a marked increase in Myna abundance over the last two decades. In autumn 2004, Parks and Conservation collaborated with the Australian National University (ANU) in a trial to determine whether these birds could be successfully removed from the urban area using a humane trapping technique. The results of this trial suggested that whilst trapping can have some impact on Myna numbers in the vicinity of traps, it may not be a practical method to eradicate or achieve a long-term reduction in Myna numbers on a broad-scale.

Indian Mynas will eat dog and cat food left outside in the back yard. This 'free feeding' contributes to the increase in Mynas. You can help to reduce the Myna problem in your suburb by ensuring that these birds do not have access to these food sources.