Two cane toads have been found in Rosenthal Street in Campbell. It is thought they were most likely accidentally transported to Canberra from Queensland.

It is highly unlikely a cane toad population would establish here due to our cold winter climate – and water temperatures are too cold at the moment for them to breed – but they could survive in our warmer months.

Cane toads pose a threat to native and domestic animals due to their toxicity. They can also out-compete native species for food and habitat.

ACT Parks and Conservation is working with residents in the surrounding area to get information about how the cane toads got to Canberra.

We also encourage members of the community, particularly within Campbell, to keep a look-out and to be mindful of their pets. If you have any concerns please contact your vet.

How to identify a cane toad

They can be grey, yellowish, olive-brown or reddish-brown and their bellies are pale with dark mottling. 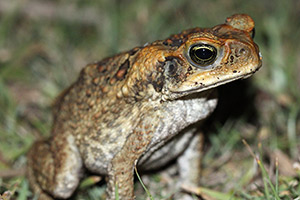 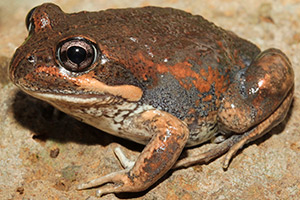 The NSW Office of Environment and Heritage has a useful website with more information on identifying cane toads.

WHAT IF YOU THINK YOU SEE ONE?

What threats do cane toads pose?

Cane toads are a threat to our biodiversity:

How can we stop future incursions?

People travelling from Northern Territory, Queensland and northern NSW should be vigilant they aren’t accidentally relocating a cane toad. Cane toads can get into vehicles, caravans, camping equipment, farm machinery and landscaping material such as pot plants, mulch and pallets.

We all have a shared responsibility when it comes to biosecurity and keeping our bush capital safe from threats.

History of the cane toad

Cane toads were introduced into Australia from America in 1935 as a means of controlling pest beetles in Queensland’s sugar cane industry. They have progressively spread across Australia ever since.