ACT Conservator of Flora and Fauna, Ian Walker has made the decision to maintain the closure of several Parks and Conservation managed areas, including Tidbinbilla Nature Reserve and Visitors Centre, until further notice.

Naked flames are banned across all Parks and Conservation Service managed estate (excluding Cotter Campground) until the end of March 2020. View the map of affected areas (PDF 540KB). 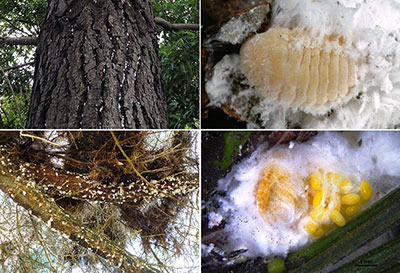 Heavily infested trees can dry up and die from the insects feeding on the tree's sap.

Giant pine scale is a tiny scale insect that lives by sucking the sap of pine, fir and spruce trees. Confirmed in Melbourne’s south-eastern suburbs for the first time in 2014, giant pine scale presents a new Biosecurity threat to softwood plantation industries. Heavily infested trees can dry up and die from the insects feeding on the tree’s sap, impacting pine trees in parks, softwood plantations and residential properties if not properly managed.

There are currently no effective chemical treatment options available for giant pine scale.

What to look for

Giant pine scale infested trees can be easily recognised by the white, cotton wool-like wax the insect produces that looks like snow on the tree’s trunks and branches. While the insect typically prefers the lower part of the tree (i.e. trunk), it can also be found on branches and exposed roots.

What to do if you see it

If you find giant pine scale on a pine, spruce or fir tree in the ACT report it to: