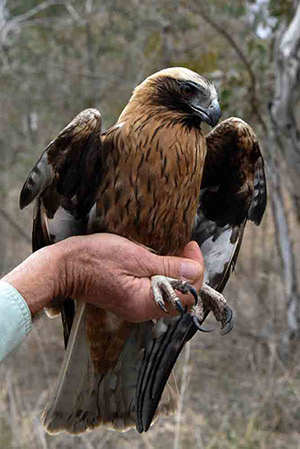 One of the smallest eagles in the world, the Little Eagle (Hieraaetus morphnoides) risks becoming extinct in the ACT region in the medium-term future unless active steps are taken to protect its habitat.

Originally found throughout mainland Australia, there has been a suspected decline in its abundance in south-eastern Australia over the last 30 years.

Little Eagles are stocky, powerful birds with a wingspan over a metre. They have a broad head, fully feathered legs and a square-cut, barred tail. They can occur in both light and dark colour forms. The most common is the light form which is dark brown above with black streaks on the head and neck, and a sandy to pale underbody. The females weigh almost twice as much as the males.

Little Eagles usually live in woodland and open forest, nesting in mature trees on hillsides in open woodland and along tree-lined watercourses. They build stick nests and line them with leaves and may use nests of other birds such as ravens. Sightings of the Little Eagle have been recorded across the ACT, but their breeding range is usually restricted to woodland areas such as the Murrumbidgee and Molonglo river corridors.

The Little Eagle was declared a vulnerable species in the ACT in 2008. It is also listed as vulnerable in New South Wales.

Given that almost 80% of lowland woodland areas in the ACT have been lost since European settlement, the primary threat to the Little Eagle is loss of habitat.

In the 2017-2018 breeding season a minimum of nine nesting pairs of Little Eagles were confirmed in the ACT. 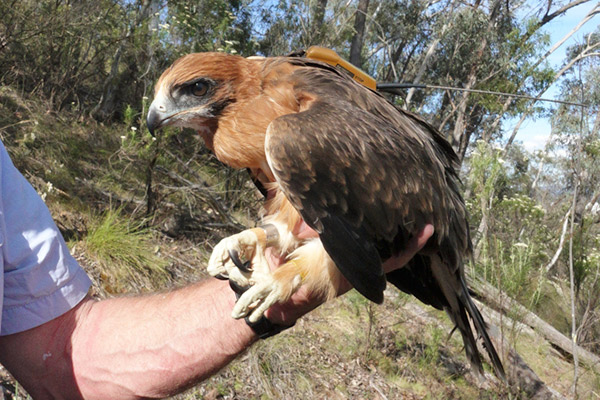 A joint research project is being undertaken to monitor the ecology and movement of the Little Eagle in the ACT. Researchers have installed cameras at a few of the known nesting sites in the ACT to provide valuable information about breeding and chick rearing behaviour. Satellite trackers have also been attached to Little Eagles to help unravel their complex movement patterns across ACT and the country.

The research group includes researchers from the Australian National University, ACT Government, CSIRO, the University of New England and the Ginninderry development project.

Little Eagle breeding season begins in August and the first of the chicks hatch in mid-October.

Nests of nine pairs have been identified in the ACT and a further four pairs identified just over the border in NSW. Of these birds eight raised a chick. Of the other pairs, one pair had their egg destroyed by a Currawong, one pair lost an egg during a storm and another either lost their egg or did not lay.

Footage from nest cameras provides valuable information on eagle ecology, including how long the eggs take to hatch, how quickly chicks grow, how young chicks are cared for and what food items are brought to the nest.

Satellite trackers have been harnessed onto the backs of four breeding males three fledglings. The trackers provide information eight times a day on a Little Eagle’s location, altitude and speed.

Data showed that during the breeding season, the four males mostly stayed within a few kilometres of the nest site, and all took occasional flights more than 10km, with one travelling over 40km out and back from its nest area. These movements were consistent with that of a tracked male which nested in West Belconnen in two previous years, who had a foraging range of around 65 square kilometres.

A GPS backpack was also attached to a fledgling female chick reared on Black Mountain in the spring of 2017. The GPS recorded an incredible journey that spanned from north of Bundaberg in Queensland, back south past the ACT into Victoria, then as far west as Port Pirie in South Australia and across to the East Gippsland region in Victoria where she was most recently recorded.

Three fledglings from the 2018 breeding season were also fitted with GPS trackers. All male and fledging birds with trackers left the ACT by mid-autumn. One adult male and one young bird have flown to Melbourne, while another adult male and a 4-5 month year old fledgling flew to north-west Queensland. 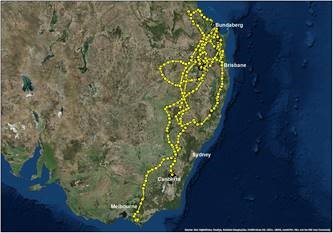 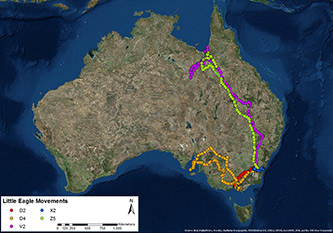 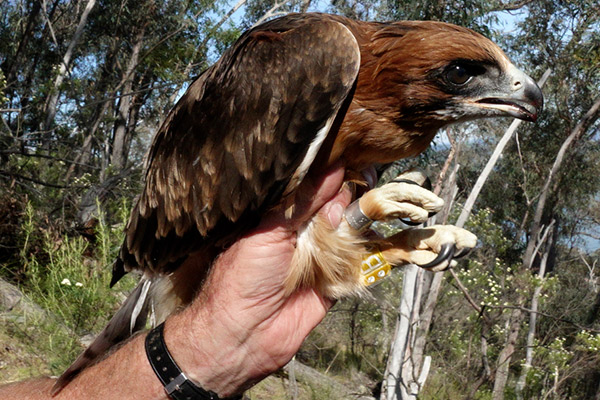