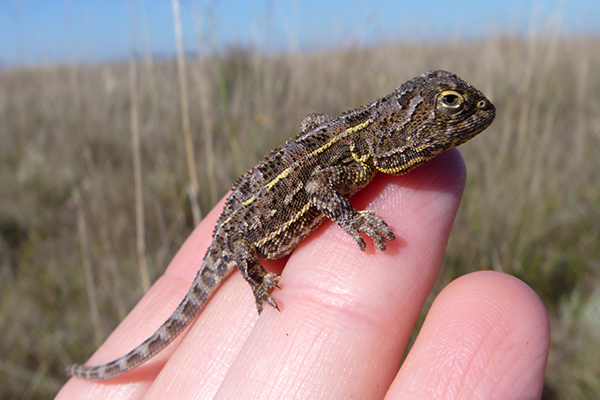 The native Grassland Earless Dragon (Tympanocryptis pinguicolla) was declared an endangered species in the ACT in 1996 and has special protection status. It is listed as vulnerable internationally, endangered nationally and in NSW, and threatened in Victoria.

The species was probably once widespread throughout south-eastern Australia wherever native grassland was present. In the ACT, the lizard was rediscovered in 1991 after not being recorded for 30 years; it is known to live in Natural Temperate Grassland and native pastures in the Majura Valley and Jerrabomberra Valley.

The Grassland Earless Dragon is a small lizard found at higher altitudes and in cooler regions than any other earless dragon. It is usually less than 150 millimetres long and weighs 5–9 grams. Distinctive markings on its back allow for individuals to be identified. During the breeding season, subadults and adults often have yellow-orange or reddish coloration on their throat, sides of head and flanks.

The lizard likes well-drained sites dominated by Tall Speargrass and shorter wallaby grasses, with patches of tussocks and open spaces between them. In the ACT these sites are frost-hollow grasslands that usually have had little or no ploughing or pasture improvement. The lizards use arthropod burrows, particularly Wolf Spider and Raspy Cricket burrows, for shelter and nests. Eggs are laid in November to January and hatch between January and March. The lizards are short lived, with females usually producing only one clutch of eggs. They eat a variety of small invertebrates, especially ants, beetles, spiders and moths (including larvae).

See the lizard's distribution on ACTmapi.

Approximately 99.5% of Natural Temperate Grassland in Australia has been destroyed or drastically altered since European settlement.

ACT populations declined dramatically between 2005 and 2009, possibly as a result of lack of ground cover caused by drought and exacerbated by overgrazing that exposed them to heat, predation and starvation. Recent monitoring has suggested there has been some post-drought recovery of populations.

The major threats to the Grassland Earless Dragon are:

The lizard's relatively low fecundity and short life span make local populations vulnerable to the effects of wildfire, drought and other environmental changes on their habitat. This vulnerability is increased where fragmentation of habitat prevents recolonisation from surrounding areas.

Habitat fragmentation and degradation will exacerbate any effects on populations from climate change, which is expected to bring warmer year-round temperatures with fewer frosts, more hot days and warm spells, and declining rainfall (especially in winter). These changes have the potential to affect the lizard's reproduction and survival as the structure of their habitat is sensitive to drought, and sparser ground cover will lead to higher ground temperatures.

Through the Grassland Earless Dragon Action Plan (2017), which continues the 2006 action plan, and the ACT Native Grassland Conservation Strategy (2017), the ACT Government proposes to maintain the conditions, in the long term, that encourage a viable, wild population.

Conservation effort is focused on protecting viable populations in functional native grassland habitat within the Majura Valley and the Jerrabomberra Valley.

The highest level of protection is in nature reserves, though populations of the species have been maintained on leased Territory land used for stock grazing, providing the grazing regime is compatible with maintaining suitable habitat. Where the species occurs on Commonwealth land, the ACT Government will continue to liaise with the Australian Government and Canberra Airport to encourage continued protection and management.

Restoring grasslands to low or marginal quality habitat might help the Grassland Earless Dragon colonise and occupy these areas when conditions are favourable, and hence help maintain genetic diversity in the longer term. There may also be opportunities to reconnect sub-populations.

Maintaining a varied grassland structure and avoiding herbage biomass extremes will maximise the range of shelter and thermal niches and food for the lizard. As part of this, small-scale patch burning has been trialled in Jerrabomberra West Grasslands.

For an improved understanding of the species' biology, ecology, habitat and techniques to breed in captivity, the ACT Government will continue to collaborate with other states, universities, CSIRO, Australian National Botanic Gardens, other research institutions and non-government organisations. Monitoring will continue to determine long-term population trends and evaluate the effects of management.