Australian native fish, including four rare and threatened species, will be the winners in a conservation project to improve the Upper Murrumbidgee River near Tharwa.

The Tharwa Fish Habitat Project will rehabilitate part of the river to help native fish thrive. The area has been degraded since the 1800s by land clearing, erosion, competition from non-native fish, and water extraction.

The project is in the Upper Murrumbidgee Demonstration Reach, a 100 kilometre stretch of river from Bredbo in NSW to Casuarina Sands in the ACT. The Reach showcases techniques that land managers and community groups can use to rehabilitate and protect aquatic and riparian (river edge) habitat.

Tharwa was chosen because it is severely affected by large amounts of sand produced by land clearing.

This work is of national interest given the Upper Murrumbidgee is home to endangered Murray cod, trout cod, Macquarie perch and Murray crayfish and the Murrumbidgee River corridor is listed on the Register of the National Estate.

The project is funded by an Australian Government Caring for Our Country grant, an ACT Environment Grant, MDBA Native Fish Strategy and ACTEW. It is an action under the Upper Murrumbidgee Demonstration Reach and ACT Action Plan 29: Aquatic species and riparian zone conservation strategy.

The Murrumbidgee River is an important part of the Murray–Darling Basin, where native fish populations are estimated to be only 10% of pre-European levels.

The river’s poor condition is largely the result of land clearing of the Monaro region for grazing. Several large floods in the mid 1800s washed large amounts of sediment into the river, and erosion has continued since then. Large sections of the river near Tharwa are blanketed by a ‘sand slug’ that smothers the rocky and woody habitat favoured by native fish and prevents fish movement along the river. Large fish need about a metre of water for passage, but summer average water depth is about 30cm in this stretch of the river. 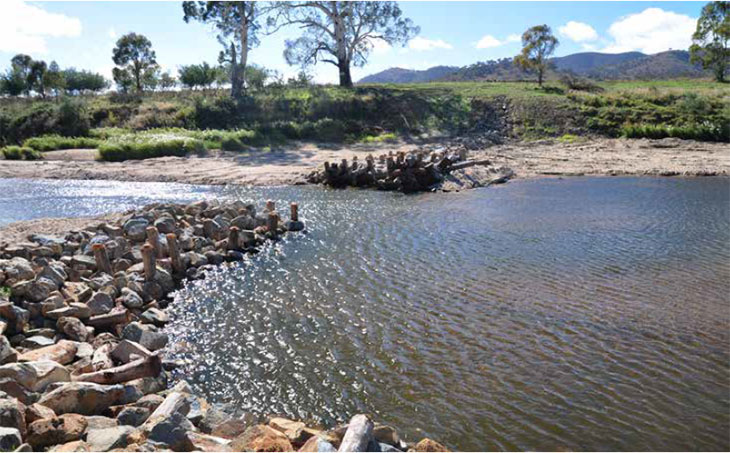 Tree clearing not only facilitated erosion, but removed the source of large woody debris essential to healthy river ecosystems.

The problems have been exacerbated over the years. Introduced fish species have competed too well with native species and become pests. Water extraction, particularly from the construction of the Tantangara Dam, has reduced flows by 60% at the ACT border.

The Tharwa Fish Habitat Project will trial the use of engineered log jams to improve fish habitat in the river reach and augment some existing rock groynes (outcrops of rock).

The log jams are made of interlocking hardwood logs and rock. Some of the logs still have their roots attached, which helps the log jams maintain stability and provides the woody habitat that is an important native fish habitat.

The river will swirl between the log jams and groynes, scouring the sand, deepening the channel and creating pools that make it easier for the fish to pass this section of river.

The river corridor will be further improved and stabilised with tree planting under the ACT Million Trees Program. Shrubs and macrophytes (plants that grow in or next to water) will be planted on the sand bar and river edge, larger trees and shrubs will planted up the bank and onto the floodplain. Weed control and site rehabilitation will accompany the planting.

The ACT Government and community groups such as Waterwatch are monitoring the site and its aquatic life before and after the log jams are constructed to measure the effectiveness of the project and its potential for use at other sites.

Engineered log jams have proved their worth elsewhere in Australia. They have a positive effect on the physical and ecological functioning of rivers, are cost effective and reuse logs that would otherwise be burnt or chipped.

When the project is complete, the channel will be deeper near the log jams and fish will have access to a deeper water shelter site when moving through the Tharwa reach.

The log jams wood is a natural habitat component for many riverine animals, including fish. Wood ‘snags’ provide spawning sites for fish, places to hide from predators and a habitat for the algae and micro-organisms that fish eat. A healthy ecosystem will give native fish the opportunity to breed, with the expectation the endangered populations may eventually recover. For example, around 80% of Murray cod are found within one metre of structural habitat such as log jams.

The log jams and rock groynes were constructed in March 2013 by the NSW Soil Conservation Service.

The ACT Government is working with partners and community on initiatives that cross the border to improve connectivity along the river, including the Upper Murrumbidgee Demonstration Reach and the Actions for Clean Water initiative.

Demonstration Reach techniques that can be used by landholders and community groups and replicated or adapted on other stretches of the river will be publicised and promoted.