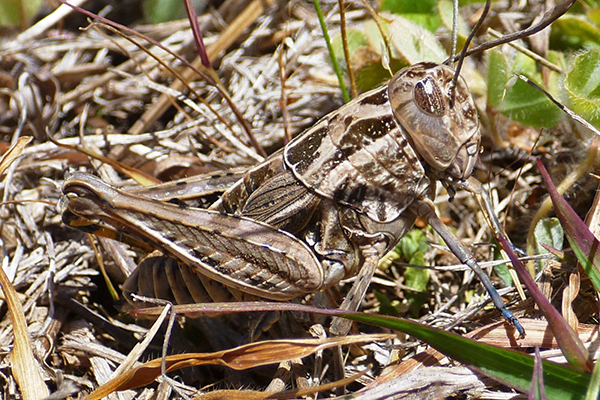 The native Perunga Grasshopper (Perunga ochracea) was declared an endangered species in the ACT in 1997 and has special protection status.

The species appears to have a small range stretching 180 km east–west and 150 km north–south and including Murrumbateman, Gundaroo, the ACT and Bungendore. However, the area of occupancy within much of this range is likely to be low because habitat alteration and fragmentation have reduced or destroyed populations.

Approximately 99.5% of Natural Temperate Grassland in Australia has been destroyed or drastically altered since European settlement. The Perunga Grasshopper is mostly restricted to larger areas of remnant habitat.

This small grasshopper is characterised by a pale cross on the upper side of the thorax and vestigial wings. The species is flightless—but it can leap more than a metre. Females are about 30 millimetres long and males about half that. The colours on its back can vary from year to year, with a tendency toward grey-brown in dry years and greenish in wet years.

Nymphs hatch in late summer and autumn and develop over the winter and early spring. They only have a 12-month cycle. The grasshoppers eat forbs (small flowering plants).

In the ACT, the grasshopper has been found in Natural Temperate Grassland dominated by wallaby grasses, speargrasses or Kangaroo Grass, and in other native grasslands. Field observations suggest the species uses grass tussocks as shelter spaces, and likes sites containing vegetation mosaics with tall tussock grasses, shorter grasses and forbs and bare ground.

The major threats to the Perunga Grasshopper are:

Habitat fragmentation and degradation will exacerbate any effects on populations from climate change, which is expected to bring warmer year-round temperatures with fewer frosts, more hot days and warm spells, and declining rainfall (especially in winter). Insects and lizards have a limited ability to physiologically acclimate to higher temperatures, and species that are close to their heat tolerance limit will be most at risk from climate change.

Because the grasshoppers are flightless and live alone in a low density environment, genetic diversity is unlikely, which may threaten the species. More research is needed on this.

The long-term conservation of the Perunga Grasshopper depends on protecting its native grassland and grassy woodland habitat.

Through the Perunga Grassland Action Plan (2017), which continues the 2006 action plan, and the ACT Native Grassland Conservation Strategy (2017), the ACT Government proposes to maintain the conditions, in the long term, that encourage a viable, wild population.

The species is hard to detect and monitor and little is known about the distribution and abundance of the species within sites, or its ecology and biology. Research is needed on all aspects of its biology, lifecycle and ecological requirements.

Where the species occurs on Commonwealth land, the ACT Government will continue to liaise with the Australian Government Department of Defence and Canberra Airport to encourage continued protection and management.

Maintaining a varied grassland structure and avoiding herbage biomass extremes appear to be the best conditions for the grasshopper. Structural variety suggests that low to moderate kangaroo grazing may favour the species. Results from a grassland enhancement trial at Canberra International Airport suggest that a sparse population can respond strongly to improved conditions.

For an improved understanding of the species, the ACT Government will continue to collaborate with other states, universities, CSIRO, Australian National Botanic Gardens, other research institutions and non-government organisations. Monitoring will continue to determine long-term population trends and evaluate the effects of management.