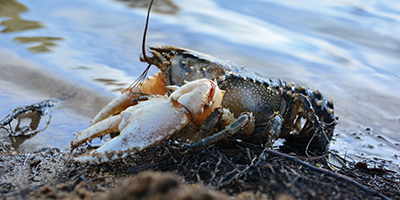 The Murray River Crayfish is the second largest freshwater crayfish in the world and at risk of extinction unless actions are taken to conserve the species and protect its habitat.

Also known as the Murray Crayfish, Murray Lobster and Mungola, the Murray River Crayfish (Euastacus armatus) was listed as a vulnerable species in the ACT in 1997. It is listed as vulnerable in NSW, threatened in Victoria and protected in South Australia.

The crayfish lives in the southern Murray–Darling Basin below about 700 metres above sea level.In our region it lives in the Murrumbidgee River, lower Cotter River below the Cotter Dam, Tumut River, Goobragandra River and lower Goodradigbee River. It was occasionally seen in the Cotter River at Bracks Hole and may still occur within the new Enlarged Cotter Reservoir. It is no longer seen in the Molonglo, Queanbeyan and Yass rivers.

Murray River Crayfish like to live in permanent rivers and large streams where the water flows moderately fast. In the ACT, they burrow in amongst boulders and cobble and use tree ‘snags’ for cover. They mainly feed on woody debris, biofilms and leaf litter but also fish and animal carcasses. Because they shred large woody and leafy debris while eating, they help the aquatic nutrient cycle.

Murray River Crayfish can be up to 50 centimetres long and weigh 2.7 kilograms, but are usually less than half this size. They can live more than 30 years. Mature females mate in May and carry up to 1500 eggs under their tail through winter, only releasing the juveniles in late spring or early summer.

Freshwater crayfish and their habitats are imperilled globally, and the Murray River Crayfish is no exception. The major threats are habitat destruction or modification, river regulation, overfishing, alien species, disease, barriers to passage and climate change.

Although fished by Indigenous Australians for thousands of years, commercial fishing from the 1920s to the 1970s in NSW resulted in significant population decline, as did recreational fishing in the ACT.  A fishing ban was introduced in 1991, however no significant changes in abundance have been observed and unfortunately illegal angling and overfishing still remain a threat.

The crayfish are eaten by predatory pest species such as Redfin and Carp and large native fish. If non-native or non-local crayfish (for example, alien yabbies used in aquaculture and aquaponics systems) enter the crayfish habitat they could compete with the crayfish, eat them or introduce disease. Imported live crayfish can carry fatal diseases and fungi.

Climate change puts the crayfish at risk. The predicted increase in summer storms and frequency of bushfires means the thermal cues (a drop in water temperature in autumn) used by the crayfish to initiate breeding may change. The species has already been lost from downstream warmer areas of the Murray–Darling Basin in South Australia.In addition, wildfires increase the risk of ‘blackwater events’ due to ash and fire debris run-off.

Because of its vulnerability to extinction, it has been prohibited to take the Murray River Crayfish from ACT waters since 1991.

The ACT Government is contributing to improving riparian habitat for many native species, including the Murray River Crayfish through:

The action plan outlines how we can:

The plan also calls for the import and keeping of introduced crayfish to be prohibited to prevent diseases and potential competitors becoming established in the ACT.