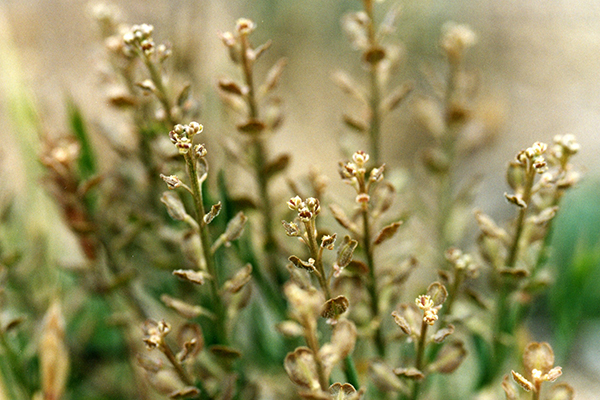 The Ginninderra Peppercress (Lepidium ginninderrense) has just three known populations, both in Canberra. The importance of conserving this rare plant saw it declared an endangered species in the ACT in 2001 and given special protection status. It is listed as vulnerable nationally, has a National Recovery Plan and one of its sites has been added to the National Register of Critical Habitat.

Ginninderra Peppercress is a perennial herb that grows about 20 centimetres high. It has between one and six branched stems and thick, fleshy leaves. Small cream-coloured flowers appear in late spring. Seed sets in December and disperses in autumn and winter. The plant appears to prefer living in alluvial soil in slight, bare depressions that hold water after rain. They are often surrounded by other native grassland species.

The main threats to the species are likely to be habitat loss from urban development and habitat degradation from intended or unintended actions associated with land management and/or visitor activities.

Disturbance of the existing drainage patterns or inappropriate management may lead to changes in the plant’s open habitat that might encourage high levels of vegetation biomass and weed invasion.

Individual plants may be quite short-lived, which could make the populations vulnerable to even short-term disturbances.

A range of indirect impacts resulting from a changing climate may threaten the persistence of the species at some sites, these include increased drought conditions, changes in plant species composition (including invasive species), and fire frequency and intensity.

A lack of connectivity and of genetic diversity within populations is likely to reduce the resilience of the species to the impacts of climate change.

The Lawson site is managed by the Department of Defence with advice from the ACT Government and specialist consultants. When sheep and unnaturally high numbers of kangaroos were in the area it was fenced off to protect the plants, but is now open so kangaroos can control the native grasses. The main focus of the current site management plan is weed and biomass management and monitoring of kangaroo grazing pressure. Access to the site is restricted by the Department.

The Franklin site is not formally protected as a reserve but is managed by the ACT Government to conserve Ginninderra Peppercress and other threatened species. The Government slashes along tracks and fence lines to reduce the accumulation of vegetation that might smother the plants.

Through the Ginninderra Peppercress Action Plan (2017), which updates the 2006 plan, and the ACT Native Grassland Conservation Strategy (2017), the ACT Government proposes to continue to preserve the species in perpetuity in the wild across its natural geographic range. Specific objectives of the action plan are to:

Due to the small size and fragmented distribution of the populations, management actions will maintain existing conditions and ensure nearby activities do not adversely affect the sites. This means managing vegetation, weeds and grazing pressure and avoiding development, recreation activities or construction of access tracks near the sites.

Researchers and park rangers continue keep an eye out for new populations of the species when conducting vegetation surveys in other suitable habitat.

For an improved understanding of the species’ ecology, habitat, propagation and translocation, the ACT Government will continue to collaborate with other states, universities, CSIRO, Australian National Botanic Gardens, other research institutions and non-government organisations such as Greening Australia.