Managed by ACT Parks and Conservation Service (PCS), these reserves are important habitat of many threatened species including:

In 2015, ACT PCS embarked on a three year restoration project to improve the adaptive management of grassland ecosystems within Canberra Nature Park with an emphasis on improving and expanding habitat for threatened species.

Working with ACT NRM and with funding from the Australian Government National Landcare Program, ACT PCS is working to deliver key actions for the conservation and protection of species and ecosystems of national environmental significance, such as the native grasslands.

The project is trialling site specific managed disturbance to increase habitat diversity for threatened species including: 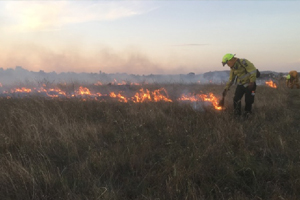 Aboriginal people have been managing lands and waters throughout the ACT region for thousands of years. A large part of this management was the effective use of fire regimes. Fire management techniques implemented by Aboriginal people proved successful for many thousands of years. The rules and regulations around the use of fire in Aboriginal society provided the foundations of land management practices that achieved sustainable living balances and promoted healthy ecosystems.

The Grasslands Restoration Project ‘Burning for Biodiversity’ trials are designed to improve our understanding of the impact of fire regimes on the biodiversity and function of ACT grassland ecosystems. Burning can influence ecological conditions to enhance establishment and vigour of native species over weeds, promote flowering in native forbs and facilitate the re-establishment of perennial tussock grasses

From 2015 to 2018, planned burns are being implemented in each of the grassland nature reserves. The aim is to create a landscape with a patchy structure of short, medium and tall vegetation. This variability is known to provide the greatest benefit to grassland fauna.

Burn areas range in size from 5-10ha. Overall, around 200 hectares of grassland will be involved in the treatment. Ecological burn trials will occur during Spring and Autumn.

These ecological burns are being planned and implemented to minimise impact on threatened fauna and maximise biodiversity response.

Ecological burn trials are being implemented in partnership with the Healthy Country team and the Murumbung Rangers. 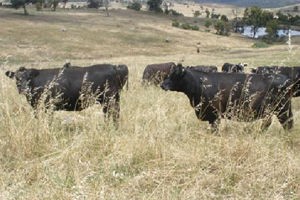 Strategic stock grazing is being trialled in grassland nature reserves with a history of livestock grazing. These trials will assist in the management of grass biomass and the manipulation of habitat for threatened fauna (such as the Grassland Earless Dragons and Striped Legless Lizards) where native herbivores such as Eastern Grey Kangaroos are unable to graze.

Strategic grazing involves the use of domestic stock such as sheep or cattle for biodiversity conservation outcomes. These outcomes include

The trial is being undertaken only in sections of the grassland nature reserves. It is targeting the depletion of undesirable exotic grasses including canary grass, cocksfoot and black oats and promoting summer-growing native perennial grasses such as Kangaroo Grass. 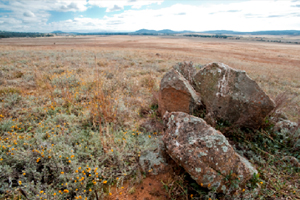 Bush rocks provide important habitat for a high diversity of flora and fauna. Many fauna species use rocks and rocky outcrops as shelter from predators, extreme weather conditions and wildfires. While several rare and threatened flora species only persist in rocky outcrops as they provide refuge from fire, grazing and other intensive agricultural practices.

Within the ACT there are three threatened reptile species (pink-tailed worm-lizard, striped legless lizard and grassland earless dragon) known to be impacted by the removal of surface rocks and numerous other rare and non-listed plant and animal species.

The ACT government has undertaken extensive work reinstating large quantities of habitat across a number of disturbed grasslands in the Molonglo River Nature Reserve (Barrer Hill restoration project) in an effort to reinstate habitat for the pink-tailed worm-lizard. 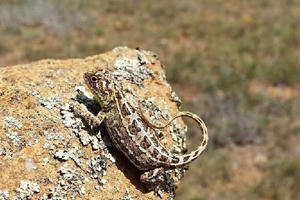 Now as part of the Grasslands Restoration Project, the ACT PCS is exploring the value of reinstated surface rock for other grassland reptiles, including the endangered Grassland Earless Dragon, invertebrates and flora at five grassland reserves across Canberra Nature Park.

The project aims to improve biodiversity and threatened species habitat of the grassland reserves and test the effectiveness of rock addition for grassland habitat enhancement.

The surface rock was sourced from nearby urban development. It consists of bed rock that has been crushed to size. This will minimise the chance of introducing weeds into the sites. Rocks were distributed across 10 plots in May 2016 by an excavator to minimise soil disturbance and damage to the grasslands. 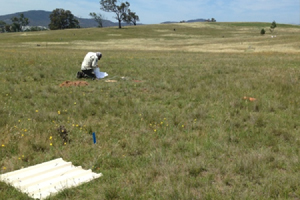 Monitoring of the trials

An important part of the Grassland Restoration Project is the combination of research, management and monitoring under the adaptive management model. These components will promote flexible decision making. It will also provide for the adaptation of management actions to site-specific conditions.

Each management action is being monitored to help better understand how grazing, burning and surface rock can influence: 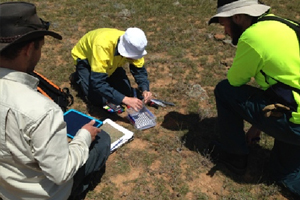 Monitoring of key biodiversity indicators (ecological condition, habitat structure, and threatened fauna) is being undertaken across the 3 year project period. Monitoring will allow ACT PCS to apply knowledge acquired from each management application to future trials conducted as part of the project. Monitoring will assist with the assessment of the effectiveness of all management actions.