Dieback refers to the gradual deterioration of health in trees, sometimes leading to tree death. Dieback is usually caused by a combination of factors, such as disease and pathogens, insect attack and/or stressful climate conditions. Dieback in Australia is not a new issue; hardy native trees have historically been able to withstand stressors throughout their life (for example, droughts, water stress, disease and insect attack).

More recent reports of dieback, both globally and in the ACT, now consider that additional stress from climate change contributes to tree mortality.

While dieback affects many species in the ACT and NSW regions (including Eucalyptus Viminalis, E. Bridgesiana and E. Melliodora), recent observations supported by satellite imagery have recognised a significant increase in the incidence of dieback in Blakely's Red Gum (E. Blakelyi). Dieback of Blakely's Red Gum appears to affect any age class and is occurring across rural landscapes, urban environments and reserves within the ACT. High rates of mortality among younger trees have resulted in a lack of successful maturation across the ACT landscape. If younger trees are unable to replace the older, dying trees, the population will slowly thin out.

A great deal of uncertainty surrounds the cause of Blakely's Red Gum dieback in the ACT, and is thought to be the result of a number of stress-inducing factors, impacts associated with climate change and reduced resilience within the landscape.

A multi-disciplinary approach to further research regarding this issue is being discussed within the ACT Government, with the aim of determining the root causes and identifying potential future actions to improve the health of Blakely's Red Gum. Dieback in eucalypt species is often first recognised by crown thinning as branches become increasingly bare as foliage is reduced. 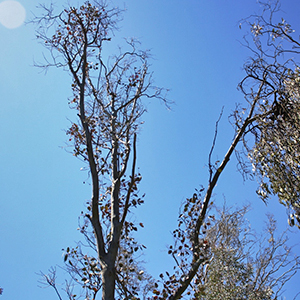 In response to reduced foliage, eucalypts will attempt to regenerate through epicormic shoots along the trunk and branches. If the tree is not resilient enough to the level of stress it is experiencing, the remaining leaves and shoots will die and fall of leaving a bare tree structure.

Dieback is a response to pressure or stress occurring in a tree's environment. A number of tree stressors are well established, though it is unlikely that any single factor is the cause to such widespread dieback. It is more likely the result of a number of combined or interrelated factors that have altered the tree's condition and environment to the point where the environment is no longer optimal. If an environmental change stresses a tree while favouring another pest or competitor, this will contribute further to dieback. It is also sometimes the case that when a tree becomes stressed, they become even more vulnerable to other factors. For example, when insects attack the leaves of a tree, the tree may respond by producing epicormic leaves. These leaves are more nutritious and attractive to insects, encouraging them to defoliate that tree even further.

Eucalypt trees are resilient and hardy, and are equipped to deal the natural environmental pressures in Australia’s landscape, such as:

When trees respond to a lack of available water, their physiology is temporarily changed in an effort to survive. This change can make them more vulnerable to other stresses from pests, diseases or other factors.

Excessive defoliation and leaf damage by insects has been identified as a contributor of dieback across eastern Australia. Insect attack is more likely to increase when soil moisture, nitrogen and leaf turnover also increase. Often the insects are native and contribute to a healthy ecosystem; but a change in normal ecosystem functioning may cause some insect populations to become excessive. As eucalypt trees attempt to replace damaged foliage through epicormic shoots, the new leaves are richer in nutrients and more attractive to insects. Insect attack can become more severe when temperatures increase. Higher temperatures can accelerate the development of some insects, which puts pressure on tree that may already be struggling to cope with drought conditions and loss of vegetation understorey. 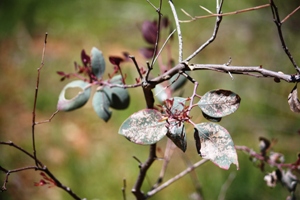 Disease and fungal leaf pathogens can contribute to dieback by causing the tree stress and reducing its vigour. Spread by insects or birds, disease primarily affects the foliage and can be observed by blemishes and dead patches on leaves. Common diseases are fungal, and include crinkle leaf disease, corky leaf spot, and sooty mould. Mistletoe grows as a parasite that attaches to the branches of trees and uses water and nutrient resources. While healthy trees can support mistletoe infestations to some extent, the parasite can prevent the ends of branches from receiving nutrient supply, causing those ends to die. The trees' ability to cope is reduced during prolonged periods of dryness, where necessary resources are exhausted. While eucalypt species are inherently able to cope with relatively dry conditions, prolonged periods of water starvation physiologically stresses trees and reduces their ability to respond to biotic stressors, such as insect attack and pathogens. Excess water resulting in water logging can affect the roots’ ability to take up oxygen and nutrients from the soil and cause wilting and root decay.

Trees established in soils with greater levels of available nitrate and phosphate are more vulnerable to dieback. Increased nutrient availability is more likely to encourage an understorey of introduced species (as opposed to native species), particularly where moisture is also available. Nutrient toxicity is also a contributing factor if nutrient levels exceed the requirements of the tree. This might be observed through slowed growth and yellowing leaves. Nutrient toxicity also has implications for regeneration.

Land management practices since European settlement have altered the landscape in a way that may be less suitable for some trees and more suitable for other species. These practices may include:

A lack of shrubs or native vegetation surrounding a tree, causing it to become isolated, can contribute indirectly to dieback by altering natural ecosystem functioning and contributing to other tree stressors. When trees are isolated, stock can graze close to the tree, contributing to impacts from soil compaction. Native vegetation promotes healthy soil structure and function, reduces erosion and provides habitat and shelter. Without surrounding vegetation available for habitat, animals that usually predate insects are also more likely to be absent and unable to help control the extent of insect attack. This has the potential for local insect populations to grow and cause excessive tree damage. Without native vegetation, birds potentially carrying disease or mistletoe may be encouraged to roost more often in the tree canopy as opposed to any ground vegetation. When deep-rooted vegetation is removed, it can mean there is little control over water table levels, which increases the tree’s vulnerability to weather extremes.

Altered chemical imbalances in the soil may cause the soil environment to become less optimal for the tree. This might occur in rural areas where fertiliser and other chemicals have been applied, due to run off, caused changes in an area that was not the intended target area.

Soil compaction from machinery, cropping or grazing livestock affects the physical integrity of the soil. Compaction causes increased bulk density and reduced porosity, which impacts on water infiltration, nutrient cycling and soil microbe communities. Grazing hinders germination of eucalypts by compacting the seedbed. Grazing also inhibits generation of a native understorey and, for eucalyptus seedlings, reduces their likelihood of survival.

Reduced landscape resilience as a result of climate change may be contributing to widespread dieback; though it is not for certain. It may be that if a population of trees are already predisposed to dieback (through old age, drought, disease, etc) a shifting climate may be a final trigger causing widespread dieback. As climate change will continue to affect the landscape, it may be that the environmental conditions are no longer suited to some species, and other plants which are better suited to the new conditions may replace others.

In the ACT, some of the projected changes caused by a shifting climate include:

For more information about how climate change is affecting the ACT read the ACT Climate Change Strategy.

What can you do?

Although there is significant uncertainty surrounding the causes of dieback, preventative actions can avoid tree stress and tree susceptibility to dieback:

What are we doing?

Future research into the long-term, broader landscape process that might be causing dieback is being discussed within the ACT Government. Research can provide a greater understanding surrounding:

The Environment, Planning and Sustainable Development Directorate (EPSDD) engaged researchers Dr Alie Cowood and Dr Jasmyn Lynch at the University of Canberra to undertake a project to better understand the causes of red gum dieback in the ACT. A adjacent map demonstrates the extent and severity of Blakely's Red Gum dieback within the ACT region (indicative only, ground verification in progress)

A spatial and temporal analysis of the distribution and health of Blakely's Red Gum has been proposed as a means to determine the rate and extent of dieback across the ACT over time. This information can demonstrate any trends or patterns that might be occurring.

The following tools, maps and data can be used to assess defoliation and tree mortality, and determine the ideal location for Blakely's Red Gum based on environmental and climate conditions:

To help improve the health and persistence of Blakely's Red Gum, some trials have been proposed:

Department of Environment and Heritage, 2004. Dieback in Native Vegetation in the Mount Lofty Ranges: A guide to causes and symptoms. s.l.:Government of South Australia.